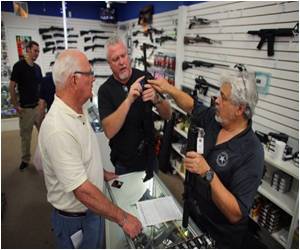 Due to injuries sustained from guns, there are approximately 7,500 child hospitalizations and 500 in-hospital deaths each year. In an abstract presented Oct. 27 at the American Academy of Pediatrics (AAP) National Conference and Exhibition in Orlando, researchers also identified a link between the percentage of homes with guns and the prevalence of child gunshot injuries.

The study found that approximately 7,500 children are admitted to the hospital for the treatment of injuries sustained from guns each year, and more than 500 children die during hospital admission from these injuries. Between 1997 and 2009, hospitalizations from gunshot wounds increased from 4,270 to 7,730, and in-hospital deaths from 317 to 503.


The study also found a significant association between the percentage of gunshot wounds occurring in the home and the percentage of households containing any firearms, loaded firearms and unlocked loaded firearms.
Advertisement
"Handguns account for the majority of childhood gunshot wounds and this number appears to be increasing over the last decade," said lead study author Arin L. Madenci, MD, MPH. "Furthermore, states with higher percentages of household firearm ownership also tended to have higher proportions of childhood gunshot wounds, especially those occurring in the home."

Study Finds Statistical Link Between Gun Ownership and Homicide
In yet another setback to the second amendment supports in the US, a new study has found a ......