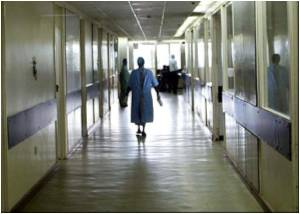 The study found a 64 percent decrease in the risk of acquiring an infection from either methicillin-resistant Staphylococcus aureus (MRSA) or Vancomycin-resistant Enterococcus (VRE). The study is published online in advance of print in the journal Infection Control and Hospital Epidemiology.

Alder Hey Children's Hospital in Liverpool is using toys sprayed with 'liquid glass' to prevent the build-up of hospital-acquired infections such as the superbug Staphylococcus aureus,
Advertisement

CHG is an antiseptic that has been shown to reduce the risk of hospital infections in patients in intensive care units but it had not previously been studied in other patient populations. Senior investigator Leonard Mermel, D.O., Sc.M., medical director of the department of epidemiology and infection control at Rhode Island Hospital, and his colleagues conducted a study on general medical hospital units to determine if daily bathing of patients using CHG cloths would be effective in reducing the risk of MRSA and VRE HAIs, as opposed to daily soap and water bathing.


Mermel, who is also a professor of medicine at The Warren Alpert Medical School of Brown University, says, "The results of our study indicate a significant reduction in the risk of developing an HAI due to MRSA or VRE. We believe that this study demonstrates that daily CHG bathing may be a beneficial infection control intervention for patients outside of the ICU setting."

Hospital-Acquired Infections May Be Curtailed With Silver, Copper Bullets

Researchers have developed films of silver and copper that can send bacteria to their grave, adding hope it could slash hospital infections.
Advertisement
In the study, a group of 7,699 adult patients admitted to general medicine units were bathed daily with CHG cloths for the duration of their admission. The control group was a group of 7,102 patients who were bathed with soap and water. Through the study, bathing was performed by certified nursing assistants. The two percent CHG cloths were kept in dedicated warmers and used according to the manufacturer's guidelines.

Steven Kassakian, M.D., is a resident who worked with Mermel and colleagues on the study. He says, "Obviously our results require further investigation but I think this study represents a fundamental step forward in patient safety and it certainly feels good to be involved in that. As a resident physician, being involved in this study was a tremendous opportunity and it feels very satisfying to think this work may have some remarkable and immediate benefits for our patients."

Mermel adds, "Our results require confirmation before CHG bathing in non-ICU patients becomes a standard of care. Nonetheless, our findings have certain strengths, including our large sample size."

Kassakian also adds, "While the findings of this study are preliminary, I think it's very exciting that the results are so substantial and novel that changing an essentially rudimentary and basic task, such as bathing can have such a profound effect on patient outcomes."

The researchers call for further studies on this easily adopted method of providing care to patients in non-ICU settings in order to continue to reduce HAIs in hospitals throughout the country.

Shockingly enough, it is being reported that nearly 19,000 people died in the United States in 2005 , after being infected with a virulent drug-resistant bacterium.
Advertisement
<< Azad to Inaugurate Three-day Conference on Community Mental...
Peer Support Effective In Reducing Depression Symptoms >>

News Archive
News Resource
Advertisement
News Category
Can you Consult a Dermatologist for Monkeypox? What Does 'Overlapping Surgery' Mean? Job Problems More Likely to Increase Physician Suicide Woman With Two Uteruses Successfully Treated Through Laparoscopic Surgery Do Doctors and Nurses Need to Nap During Night Shifts?
More News
Sign up for Wellness Consult a Doctor Sign up for Selfcare