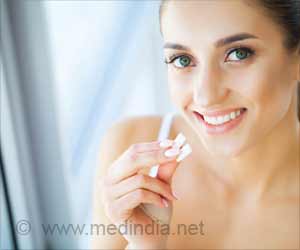 Commonly used chewing gum ingredient can put you at a higher risk of developing colorectal cancer, reports a new study.

A food additive which is commonly used as a whitening agent in products such as chewing gum and mayonnaise could lead to inflammatory bowel diseases and colorectal cancer, warns a study.


The study conducted in mice investigated the health impacts of food additive E171 (titanium dioxide nanoparticles) which is commonly used in high quantities in foods and some medicines as a whitening agent.


‘Is chewing gum bad for gut health? A common food additive E171 (titanium dioxide nanoparticles) used as a whitening agent in products such as chewing gum and mayonnaise could lead to inflammatory bowel diseases and colorectal cancer.’
Read More..


Found in more than 900 food products, E171 is consumed in high proportion every day by the general population.

Consumption of food containing E171 has an impact on the gut microbiota - defined by the trillions of bacteria that inhabit the gut - which could trigger diseases such as inflammatory bowel diseases and colorectal cancer, said the study published in the journal Frontiers in Nutrition.

"It is well established that dietary composition has an impact on physiology and health, yet the role of food additives is poorly understood," said co-lead author Wojciech Chrzanowski, Associate Professor at the University of Sydney.

"This study presents pivotal evidence that consumption of food containing food additive E171 affects gut microbiota as well as inflammation in the gut, which could lead to diseases such as inflammatory bowel diseases and colorectal cancer," he said.

Chewing Gum Does Not Help to Lose Weight
A new research has claimed that chewing gum may not help people eat less or lose weight.
READ MORE