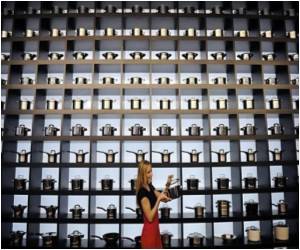 Exposure to chemicals used to make non-stick cookware and which are found in microwave popcorn may raise blood cholesterol levels in children, a study says.

Researchers led by Stephanie Frisbee of West Virginia University School of Medicine assessed blood lipid levels in 12,476 children and teens aged one to 18 years for the study published in Archives of Pediatric and Adolescent Medicine, a journal of the American Medical Association.

The children who took part in the study were part of a health project that began after a lawsuit was settled in 2002 after perfluorooctanoic acid (PFOA) was found in the water supply in the mid-Ohio River Valley.


To be part of the project, children had to have been exposed for at least a year to the contaminated drinking water.

For the study, believed to be the first to look at the link between perfluoroalkyl acids and serum lipids in youngsters, blood samples were taken from the children and teens in 2005 and 2006.
Advertisement
The average PFOA concentration in their blood was found to be 69.2 ng/mL and the average perfluorooctanesulfonate (PFOS) concentration was 22.7 ng/mL -- both much higher than the national median.

PFOA and PFOS are part of the family of manmade compounds called perfluoroalkyl acids, which humans are exposed to through everything from dust to food packaging to microwave popcorn and non-stick pots and pans.

Among 12- to 19-year-old study participants who had drunk water from the contaminated supply for at least a year, PFOA concentrations were found to be substantially higher than those found nationally in kids -- 29.3 ng/mL for the study group and 3.9 ng/mL for the others.

"PFOA and PFOS specifically, and possibly perfluoroalkyl acids as a general class, appear to be associated with serum lipids, and the association seems to exist at levels of PFOA and PFOS exposure that are in the range characterized by nationally representative studies," the authors of the study said.

Total cholesterol levels should be less than 200 milligrams per deciliter (mg/dL), according to the American Heart Association.

The study found an average difference of 8.5 mg/dL in total cholesterol levels between the one-fifth of participants with the highest and the fifth with the lowest PFOS levels.

Up to now, few studies have been conducted into the effects of long-term exposure to perfluoroalkyl acids and how they might affect health and development in humans, and the authors of the study called for more research into exposure to the family of chemicals.