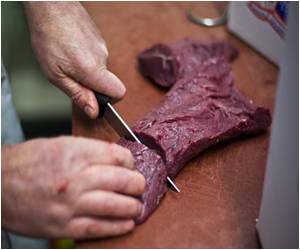 The FSA found that 43 out of 145 samples of lamb takeaway meals contained other meat such as beef, chicken and turkey, with 25 of them consisting purely of beef.

None of the samples, taken from July to December last year, contained horsemeat.


The FSA said local authorities were being asked to test 300 samples from takeaway restaurants -- a staple for British pubgoers on their way home -- as a priority, starting next month.
Advertisement
"Substitution of lamb for cheaper meats in takeaway food... is unacceptable," said FSA chief operating officer Andrew Rhodes.

"We are working closely with local authorities to ensure robust action is taken against any businesses misleading their customers.

"The recurring nature of the problem shows there needs to be a renewed effort to tackle this."

In a separate study, consumer watchdog Which? tested 60 takeaway lamb curries and minced lamb kebabs from restaurants in London and Birmingham and found that 24 of them -- and 16 out of 30 in Birmingham -- contained at least five percent of other meats.

Seven contained no lamb at all, while the meat in five could not be identified at all, probably due to overcooking.

Richard Lloyd, executive director of Which?, said: "More than a year on from the horse meat scandal, our research uncovers shocking evidence of food fraud."

He urged the authorities to crack down on offenders.

"This is vital to restoring trust in the industry, which is not only good for consumers but good for businesses too," he said.

The findings follow a Europe-wide scandal last year when horsemeat was found in millions of ready meals labelled as containing only beef.

Source: AFP
Advertisement
<< Females Have The Penis In Sex-Reversed Cave Insects
12-year-old is the Youngest Mother in Britain >>

Lamb Curry That Promotes Good Sleep Cooked by Anglo Indian Chef
Media reports indicate that an Anglo Indian chef has claimed to have created a lamb curry that will ...

Lamb Dinner is Being Eagerly Awaited by Full-Face Swap Man
The world's first person to undergo a full face transplant is a Spanish farmer, who wants to ......