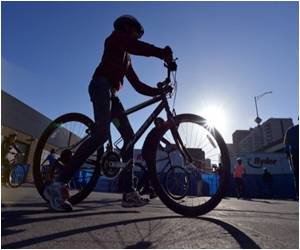 This is according to a new study from Harvard School of Public Health (HSPH) researchers. They say that U.S. guidelines should be expanded to offer cyclists more riding options and call for endorsing cycle tracks - physically separated, bicycle-exclusive paths adjacent to sidewalks - to encourage more people of all ages to ride bicycles.

The study appears online May 16, 2013 and will appear in the July 2013 print edition of the American Journal of Public Health.


Standards set by the American Association of State Highway and Transportation Officials (AASHTO) in its Guide for the Development of Bicycle Facilities generally serve vehicles well but overlook most bicyclists' needs, according to lead author Anne Lusk, research scientist in the Department of Nutrition at HSPH, who has been studying bicycling patterns in the U.S. and abroad for many years. "In the U.S., the default remains the painted bike lane on the road," she said, which is problematic since research has shown that women, seniors, and children prefer not to ride on roads with traffic.

Anne Lusk stressed the new overlap of transportation and public health. "Bicycling, even more than walking, helps control weight and we need to provide comfortable and separate bicycle environments on existing roads so everyone has a chance for good health."

The authors concluded AASHTO bicycle guidelines should be based on more rigorous and up-to-date research. If policies could allow for easier construction of cycle tracks, studies have indicated that more individuals would be willing to bicycle. Encouraging more cycling would be helpful for weight control, heart function, and would boost physical fitness for children and adults in addition to helping to reduce traffic congestion and air pollution from vehicles, said the authors.

According to a recent study published in CMAJ, cyclists who died of a head injury were three times as likely to not be wearing a helmet.
Advertisement
News A-Z
A B C D E F G H I J K L M N O P Q R S T U V W X Y Z
What's New on Medindia