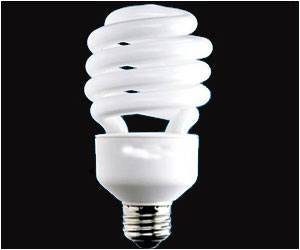 Once broken, a compact fluorescent light bulb continuously releases mercury vapor into the air for weeks to months, and the total amount can exceed safe human exposure levels in a poorly ventilated room, according to study results reported in Environmental Engineering Science, a peer-reviewed online only journal published monthly by Mary Ann Liebert, Inc.

The amount of liquid mercury (Hg) that leaches from a broken compact fluorescent lamp (CFL) is lower than the level allowed by the U.S. Environmental Protection Agency (EPA), so CFLs are not considered hazardous waste. However, Yadong Li and Li Jin, Jackson State University (Jackson, MS) report that the total amount of Hg vapor released from a broken CFL over time can be higher than the amount considered safe for human exposure. They document their findings in the article "Environmental Release of Mercury from Broken Compact Fluorescent Lamps."

As people can readily inhale vapor-phase mercury, the authors suggest rapid removal of broken CFLs and adequate ventilation, as well as suitable packaging to minimize the risk of breakage of CFLs and to retain Hg vapor if they do break, thereby limiting human exposure.


Tests of eight different brands of CFLs and four different wattages revealed that Hg content varies significantly from brand to brand. To determine the amount of Hg released by a broken CFL, Li and Jin used standard procedures developed by the EPA to measure leaching of mercury in liquids and used an emission monitoring system to detect Hg vapor.

"This paper is a very nice holistic analysis of potential risks associated with mercury release from broken CFLs and points to potential human health threats that have not always been considered," according to Domenico Grasso, PhD, Editor-in-Chief and Vice President for Research, Dean of the Graduate College, University of Vermont (Burlington).

Study Finds How LCD Projectors Switch Neurons On-Off Like Light Bulbs in Worms
A novel way to control the brain and muscles of tiny organisms, including freely moving worms has been discovered by researchers
READ MORE

Glowing Walls Could Make Light Bulbs History by 2012
A government body that supports low-carbon technology has suggested that light-emitting wallpaper may begin to replace light bulbs from 2012.
READ MORE

LED Light Bulbs in Los Angeles to Reduce Carbon Emissions
The Los Angeles civic authorities are going in for massive retrofitting of 140,000 streetlights with LED light bulbs. The move is expected to cut down carbon emissions by as much as 40 tons in a year.
READ MORE