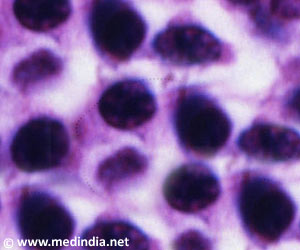 How a population of lymphocytes, called CD4+ T cells, matures into various subsets of adult T helper cells clarified by a research team led by Xian Chang Li, MD, PhD, Brigham and Women's Hospital (BWH) Transplantation Research Center. In particular, the team uncovered that a particular cell surface molecule, known as OX40, is a powerful inducer of new T helper cells that make copious amounts of interleukin-9 (IL-9) (and therefore called TH9 cells) in vitro; such TH9 cells are responsible for ongoing inflammation in the airways in the lungs in vivo.

The study will be published online in Nature Immunology on July 29, 2012.

The mechanism behind how nanoparticles from diesel exhaust damage lung airway cells has been identified by researchers from Duke University Medical Center.
Advertisement

In their studies, the researchers found that mice with hyper-active OX40 activities had signs of tissue inflammation, particularly in tissues lining the airway. A high amount of cellsas much as 30 percentin these tissues were mucin-producing cells. Mucin-producing cells produce gel-like secretions that, when combined with other secretions, can form mucus or saliva.


The results mirrored previous studies of mice who over expressed IL-9 in the lung airways. Results from additional experiments confirmed that OX40 triggers both TH9 cell and IL-9 production, thereby leading to airway inflammation.
Advertisement
"These findings may have broad impact on how to treat chronic inflammation, such as allergic inflammation and chronic allograft rejection after transplantation, since the inflammatory texture organized by TH9 cells tends to be different and ongoing." said Li.

In addition to this translational finding, Li and his team made strides in better understanding OX40's role in the molecular mechanisms of the pathway responsible for TH9 cell induction.

According to Li, the revelation that OX40 promotes TH9 cells through TRAF6 (a protein that mediates cell signaling) and the activation of a non-canonical NF-kB pathway will point to new opportunities in drug discovery and development in treatment of TH9-related diseases.

Hearing Loss Calculator Find a Hospital Diaphragmatic Hernia Indian Medical Journals Noscaphene (Noscapine) Drug Side Effects Calculator Nutam (400mg) (Piracetam) Accident and Trauma Care The Essence of Yoga A-Z Drug Brands in India
This site uses cookies to deliver our services. By using our site, you acknowledge that you have read and understand our Cookie Policy, Privacy Policy, and our Terms of Use