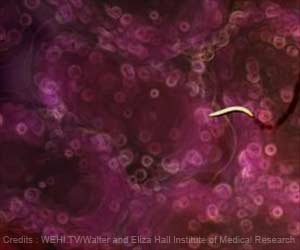 A long-standing mystery of how a protein displayed on the surface of malaria parasites called "TRAP" interacts with human host cells has now been found. A protein "TRAP" has been found to interact with a receptor protein on the surface of human cells to facilitate its navigation.

The findings of this study are published in the Journal of Proceedings of the National Academy of Sciences.

Advertisement
‘The human receptor for the malaria parasite TRAP protein has been found. The researchers have shown how sporozoite surface proteins can directly interact with human cell surface receptors and this provides an important first clue in mapping the guidance cues that the malaria parasite must use to locate and invade the human liver.’

Nearly half of the world's population is at risk of malaria, and more than 200 million people are infected each year. The disease caused the deaths of almost half a million people globally in 2015*.


Malaria is caused by Plasmodium parasites that are transmitted to people through the bites of infected mosquitoes. Once the parasites have migrated from the mosquito bite site in the human skin, they must then navigate their way to a blood vessel and through the blood stream before finally infecting the liver for the next stage of the lifecycle. However, the molecular cues between the parasites and human host cells which direct this migration have remained unclear, making it challenging to intervene and stop the parasites in their tracks.
Advertisement
In this study, scientists from the Wellcome Sanger Institute have shown for the first time that the malaria parasite surface protein, TRAP, interacts directly with proteins called integrins on the surface of human cells.

Dr. Kirsten Dundas, the first author from the Wellcome Sanger Institute, said: "For the first time, we've found a human receptor for the high-priority malaria vaccine target, TRAP. The TRAP protein on the surface of malaria parasites has been studied for the last 20 years, but a major unanswered question was how it interacted with human cells. Disrupting this interaction could be a key strategy for blocking malaria parasites' journey through human tissues to prevent infection."

The team dissected infected mosquitoes and extracted malaria parasites in the transmission stage of the lifecycle, known as sporozoites. It is the sporozoites that are transmitted to a person after being bitten by an infected mosquito. They then navigate through the skin to a blood vessel, where they travel in the bloodstream to the liver, invade liver cells and develop to the next stage of the lifecycle.

To investigate which receptors on the surface of human cells the sporozoites interact with as they travel through the body, the team tested the TRAP protein against a panel of human proteins known to be expressed on liver cells. The scientists used a technique developed at the Sanger Institute called AVEXIS which is designed to detect the typically fleeting interactions between proteins displayed at the surface of cells. This approach revealed that the parasite TRAP protein interacted with human alpha-v-beta-3 integrins. It is possible the integrins act as signposts along the parasites' journey to the liver.

Dr. Gavin Wright, the lead author from the Wellcome Sanger Institute, said: "We have discovered a human receptor for the malaria parasite TRAP protein, and have provided an example which demonstrates that sporozoite surface proteins can directly interact with human cell surface receptors. This provides an important first clue in mapping the guidance cues that the malaria parasite must use to locate and invade the human liver."

Africa to Get World's First Malaria Vaccine
Three African countries will receive the world's first malarial vaccine that has the potential to .....

Malaria Vaccine Should be Effective Against Blood Stage, Liver Stage of Infection
The blood stage of malaria infection has a very profound impact on the liver stage immune response....

Promising Malaria Vaccine Trial Begins in Burkina Faso in West Africa
A malaria vaccine developed by researchers at the University of Maryland School of Medicine has ......