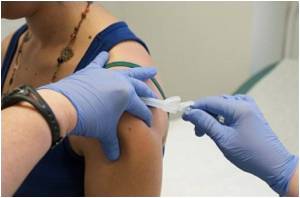 A cell-culture-derived vaccine was as effective at preventing flu as conventional vaccines grown in chicken eggs, the preferred method for 50 years, according to a study.

The findings, reported in The Lancet, could help speed approval for the new technique in the United States, which has recently said healthy adults should also be inoculated against seasonal influenza.

Cell-based flu vaccines have major advantages over the traditional manufacturing process, including unlimited supply, a shorter production time, and an alternative for persons allergic to eggs.


They may also be better suited for developing a shield against the potential pandemic threat of a deadly H5N1 bird flu mutation.

But their effectiveness had yet to be fully tested in a large-scale clinical trial, according to the authors.

Swine flu, a type of influenza caused by a new strain of the H1N1 Type A influenza virus has originated from the pigs. Winter always brings along the chills and the flu, make sure you're safe this season.
Advertisement
Noel Barrett, a researcher at the Biomedical Research Centre in Austria, and colleagues divided more than 7,000 volunteers in the United States, 18 to 49 years old, into two groups.

Participants in the first group were injected with a flu vaccine derived from lab-grown cells during the 2008-2009 influenza season, while the second group was given a placebo shot with no active ingredients.

The vaccine was nearly 80 percent effective in protecting against that year's flu strains, comparing favourably to a 73 percent rate for egg-based vaccines, as reported elsewhere.

There were no serious secondary effects, with only a few "mild and transient" problems registered.

"This study is the first published report of the clinical efficacy of an influenza vaccine derived from a Vero-cell-culture," the authors said, using the term for animal or human cell lines grown in the laboratory.

Cell-based flu vaccines have been approved for use in Europe, and were made in limited quantities before and during the 14-month World Health Organisation (WHO) H1N1 "swine flu" pandemic alert in 2009/2010.

The virus turned out to be less lethal than feared, and large stocks of hastily manufactured vaccine went unused.

But had the flu been more deadly -- especially early in the flu season -- it is unlikely that pharmaceutical companies could have kept up with demand using the egg-based method of fabrication, experts say.

In egg culture, flu viruses are injected into chicken egg embryos, where they multiply. After several days of incubation a machine opens the egg and harvests the virus, which is then purified and chemically killed.

On average it takes one or two eggs to produce a single dose of annual flu vaccine.

In cell culture, the virus is grown in animal or human cells, which are available in unlimited supply.

In August 2010, the WHO said swine flu -- which has to date claimed more than 18,400 lives worldwide -- had "largely run its course", declaring an end to the pandemic.

The H1N1 virus is now regarded as part of seasonal influenza and protection is included in standard seasonal flu vaccines.

Influenza (or rather, the flu) is a cold weather infectious condition that affects the young and old alike. Though most reported cases are mild, the flu can sometimes cause severe and life-threatening complications in both children and adults, thanks to wrong medications and improper vaccinations. Learn more about the disease from our Flu Quiz and guard yourself and your family from a poss
Advertisement
Advertisement