Celebrity Feast Being Cooked Up by Oscars Head Chef 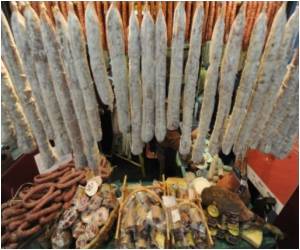 A royal tribute to front-runner film "The King's Speech" is included in the menu unveiled by the chef in charge of feeding 1,600 diners after the Oscars on Sunday.

Austrian Wolfgang Puck, who has been catering for the Academy Awards for the last 17 years, is in charge of the 250 chefs and 600 waiters who aim to serve up a feast worthy of Tinsel Town's finest.

"We make something different every year. This year my tribute to 'The King's Speech' is the entree of pan-roasted Dover Sole with fennel, olives, haricots verts, tomatoes, lemon, sherry, and olive oil," he told AFP.


Preparations for the Governors Ball, the feast which follows immediately after Sunday's Oscars show, started a month ago when Puck decided what he and his team were going to cook and sent menus to the Oscars' board of governors.

Food preservatives are basically antimicrobials or anti-oxidants that help preserve food by destroying the microbes and stopping decomposition of food products.
Advertisement
"We started cooking on Monday," with dishes that could be prepared in advance, such as smoked salmon, he said.

But "really we do everything at the last moment, like the Sole we cook Sunday afternoon, the vegetables we cook Saturday night, so everything is really fresh and tastes right.

"Everything starts rocking on Friday, when the food delivery arrives," he told AFP on Thursday.

As well as the "King's Speech" tribute, Puck is preparing a "Black Swan paella" in honor of the ballet thriller starring Natalie Portman, also tipped for Oscars glory when the winners are announced Sunday evening.

The paella includes saffron, white wine, chile, and parsley, and should be "easy for Natalie Portman to eat since she is vegetarian," said Puck, who has used his Oscars reputation to create a successful food brand.

The small army of chefs puts it all together in a state-of-the-art kitchen adjacent to the Grand Ballroom at the Hollywood & Highland Center, where the awards ceremony and post-Oscars feast are held.

The scale of the task is enormous -- as is the cost, with tickets sold at 750 dollars a plate, Puck said.

"We have some ingredients which are rather expensive, like truffles cost a 1,000 dollars a pound, we have 25 pounds. And we have caviar, 15 pounds of caviar, which is expensive," he added.

Puck says the best part of being an Oscars chef comes after the meal has been served.

"My favorite moment is when the dinner is over. I can sit back and have a glass of good champagne. I finish by midnight, sometimes I go ...and talk with some of the people that I know, some of the winners."