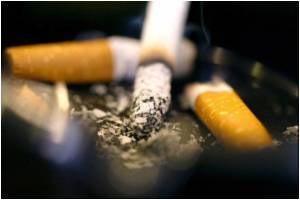 A study has analyzed whether stopping smoking cessation treatments too soon may reduce odds of success for patients. The study was led by researchers in the Oregon Health and Science University Smoking Cessation Centre.

"In 'real-world' clinic settings, health care providers must decide whether or not to continue a specific treatment based on their clinical judgment and the published reports in the scientific literature," said David Gonzales at the OHSU Smoking Cessation Center, OHSU School of Medicine.


"Patients also can become discouraged that a treatment is not working and worry about continuing to pay for treatments they believe do not work. As a result, cessation treatment for some patients may be discontinued before the prescribed treatment period is completed and the patient and/or the treatment considered a failure," he added.

Encyclopedia section of medindia briefs you about the History of Tobacco
Advertisement
The study, however, showed that a substantial proportion of smokers who became 'successful quitters' by the end of 12 weeks of treatment smoked in one or more weeks during the first eight weeks and took longer to quit.

"Had treatment been interrupted or discontinued for these 'delayed quitters,' opportunities for achieving continuous abstinence could have been lost for up to 45 percent of quitters who were ultimately successful," said Gonzales.

The researchers found cumulative continuous abstinence increased similarly for all treatments during weeks three through eight.

They also found quitting patterns among delayed quitters were similar regardless of whether they took varenicline, bupropion or received counselling only (placebo).

"Based on these findings, we believe that treatment failure, or success for that matter, should not be assessed until the recommended period of treatment is completed," Gonzales said.

The conclusion is that 'real-world' quit rates may be significantly increased by just continuing cessation treatments without interruption for patients who remain motivated to quit despite lack of success during the first eight weeks of treatment.

Their findings are published online in the journal Addiction.