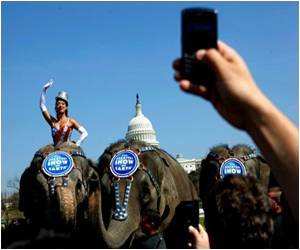 In Catalonia, political leaders launched a bid to ban circus shows using animals in the northeastern Spanish region, where bullfighting was ended two years ago.

Lawmakers proposed a bill in the regional parliament to "modify the animal protection law and include a ban on using animals in the circus," said one of the deputies, Jordi Rull.

"Circuses can be attractive and do different and fascinating things that draw adults and children, without needing to use animals," he said, adding that the number of animal circuses had declined in the region.


The bill is backed by five of the seven parties in the parliament which between them hold a majority of seats, said Rull, a lawmaker of CiU, the Catalan nationalist party that governs the region.
Advertisement
The text decries the treatment of circus animals which it says are obliged to perform "unnatural" acts in the circus and undergo "violent training methods", and develop nervous disorders when kept in small spaces.

Catalonia, home to a strong pro-independence movement, passed a law in 2008 recognising animals as having "physical and psychic sensitivity".

In July 2010 the parliament there approved a ban on bullfighting and the last bullfight was held there in September 2011 before the ban came into force in 2012.

The Spanish animal rights group Libera says 133 towns in Spain, 99 of them in Catalonia, have already put a stop to circus shows with animals.

Source: AFP
Advertisement
<< Millions of Americans Getting Health Insurance Cancelled to...
The Adverse Effects of Poverty >>

New Life in Circus Found By Rescued Nepalis
A young man climbs atop a human pyramid and performs a perfect handstand. Nearby a girl ......

Artists Complain That Ban on Wild Animals Brings Down Circus Industry
Artists associated with India's circus industry have expressed their distress over a ban on the use ...