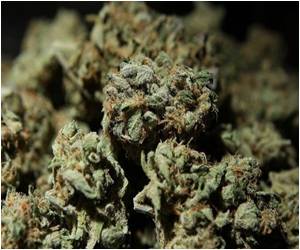 Recreational use of marijuana is linked to abnormalities in two key brain regions that are important in emotion and motivation, report scientists. The study was a collaboration between Northwestern Medicine® and Massachusetts General Hospital/Harvard Medical School.

"This study raises a strong challenge to the idea that casual marijuana use isn't associated with bad consequences," said corresponding and co-senior study author Hans Breiter, M.D. He is a professor of psychiatry and behavioral sciences at Northwestern University Feinberg School of Medicine and a psychiatrist at Northwestern Memorial Hospital.


"Some of these people only used marijuana to get high once or twice a week," Breiter said. "People think a little recreational use shouldn't cause a problem, if someone is doing OK with work or school. Our data directly says this is not the case."
Advertisement
The study will be published April 16 in the Journal of Neuroscience.

Scientists examined the nucleus accumbens and the amygdala -- key regions for emotion and motivation, and associated with addiction -- in the brains of casual marijuana users and non-users. Researchers analyzed three measures: volume, shape and density of grey matter (i.e., where most cells are located in brain tissue) to obtain a comprehensive view of how each region was affected.

Both these regions in recreational pot users were abnormally altered for at least two of these structural measures. The degree of those alterations was directly related to how much marijuana the subjects used.

Of particular note, the nucleus acccumbens was abnormally large, and its alteration in size, shape and density was directly related to how many joints an individual smoked.

"One unique strength of this study is that we looked at the nucleus accumbens in three different ways to get a detailed and consistent picture of the problem," said lead author Jodi Gilman, a researcher in the Massachusetts General Center for Addiction Medicine and an instructor in psychology at Harvard Medical School. "It allows a more nuanced picture of the results."

Examining the three different measures also was important because no single measure is the gold standard. Some abnormalities may be more detectable using one type of neuroimaging analysis method than another. Breiter said the three measures provide a multidimensional view when integrated together for evaluating the effects of marijuana on the brain.

"These are core, fundamental structures of the brain," said co-senior study author Anne Blood, director of the Mood and Motor Control Laboratory at Massachusetts General and assistant professor of psychiatry at Harvard Medical School. "They form the basis for how you assess positive and negative features about things in the environment and make decisions about them."

Through different methods of neuroimaging, scientists examined the brains of young adults, ages 18 to 25, from Boston-area colleges; 20 who smoked marijuana and 20 who didn't. Each group had nine males and 11 females. The users underwent a psychiatric interview to confirm they were not dependent on marijuana. They did not meet criteria for abuse of any other illegal drugs during their lifetime.

The changes in brain structures indicate the marijuana users' brains are adapting to low-level exposure to marijuana, the scientists said.

The study results fit with animal studies that show when rats are given tetrahydrocannabinol (THC) their brains rewire and form many new connections. THC is the mind-altering ingredient found in marijuana.

"It may be that we're seeing a type of drug learning in the brain," Gilman said. "We think when people are in the process of becoming addicted, their brains form these new connections."

In animals, these new connections indicate the brain is adapting to the unnatural level of reward and stimulation from marijuana. These connections make other natural rewards less satisfying.

"Drugs of abuse can cause more dopamine release than natural rewards like food, sex and social interaction," Gilman said. "In those you also get a burst of dopamine but not as much as in many drugs of abuse. That is why drugs take on so much salience, and everything else loses its importance."

The brain changes suggest that structural changes to the brain are an important early result of casual drug use, Breiter said. "Further work, including longitudinal studies, is needed to determine if these findings can be linked to animal studies showing marijuana can be a gateway drug for stronger substances," he noted.

Because the study was retrospective, researchers did not know the THC content of the marijuana, which can range from 5 to 9 percent or even higher in the currently available drug. The THC content is much higher today than the marijuana during the 1960s and 1970s, which was often about 1 to 3 percent, Gilman said.

Marijuana is the most commonly used illicit drug in the U.S. with an estimated 15.2 million users, the study reports, based on the National Survey on Drug Use and Health in 2008. The drug's use is increasing among adolescents and young adults, partially due to society's changing beliefs about cannabis use and its legal status.

A recent Northwestern study showed chronic use of marijuana was linked to brain abnormalities. "With the findings of these two papers," Breiter said, "I've developed a severe worry about whether we should be allowing anybody under age 30 to use pot unless they have a terminal illness and need it for pain."

Marijuana Will One Day be Legal, Believe Most Americans
About three-fourth of Americans believe that marijuana will some day be legally available to buy ......