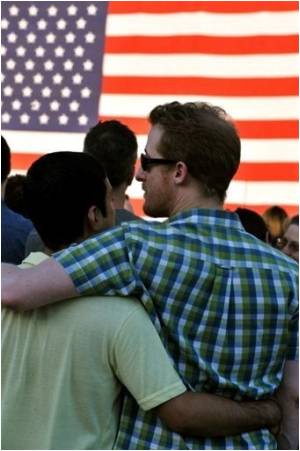 Sanjay Malhotra, the owner of an Indian travel company, knows his target market -- so he seeks out and recruits gay-friendly guides, taxi drivers and hotel managers.

"Nobody who works for me laughs or passes a silly remark if two men are obviously partners. They treat gays as anyone else because I have hand-picked these people," he said.


Malhotra's company, Indjapink, is a bold venture offering custom-designed travel packages for gay men who are keen to explore India but who are often victims of what he calls "cheap abuse and insults."


"We identify the needs of gay travellers," he said. "People who look after our clients are all aware of and respect their sexual preference, ensuring they can travel without fear of discrimination."

In a landmark ruling by the Delhi High Court last year judges said that a ban on homosexual acts, in place since British colonial times, was discriminatory and unconstitutional.

Saleem Kidwai says Gay advocacy and human rights groups were delighted, but homosexuality still carries a massive stigma in India, and the court ruling triggered protests from Hindu, Muslim and Christian groups who denounced same-sex relationships as against divine and natural law.

Malhotra, who is also a professional fashion designer, said that while the fight to gain acceptance continues, savvy marketers and entrepreneurs are now chasing the "pink money".

In many parts of the West, the purchasing power of the gay community has long been acknowledged in areas of retail from clothes and travel to bars and nightclubs.

"If there is a market for the pink dollar and pink pound, then it is time for pink rupee in India to make its presence felt," said Malhotra.

"Gay men are the biggest spenders on lifestyle products. They have maximum disposable incomes and do not hesitate to pay a bit extra if their needs are addressed," he said.

Lucknow-based historian Saleem Kidwai, co-author of a 2001 book called "Same-Sex Love in India", said he was flooded with offers from Indian publishers to write books about -- and for -- gays and lesbians.

"Until recently, publishers would outright refuse to print such books, fearing controversy and attacks by hardline groups," said Kidwai, who is researching Sufi saints who have penned verses in support of gay lifestyles.

"But now they demand it, and are commissioning writers to focus on these sorts of subjects," he said.

Sylvester Merchant, a gay activist based in Gujarat state, said the emergence of small enterprises focusing on gay and lesbian clients was a reflection of cultural changes in some sectors of Indian society.

He is about to launch a company taking tourists to temples dedicated to Bahucharaji, the goddess of transsexuals, as well as shrines of so-called "gay" saints and ancient sculptures depicting same-sex courtship and intercourse.

"Creating an economy around homosexuality is helping us to justify our existence," he told AFP.

"The idea is to enlighten gays and lesbians, many of whom worry about their natural sexual preference and choose to live in denial."

A small number of hotels, restaurants, shops and night clubs are now catering to homosexual customers in big cities like New Delhi, Mumbai, Kolkata and Bengalaru as they try to tap into a discreet but lucrative niche market.

"Worldwide, pink money is valued in billions of dollars across a variety of sectors. It is high-time India cashed in," said Ravi Dhaliwal, manager of a swish nightclub in the eastern city of Kolkata.

Dhaliwal has been organising private parties for the gay community since 2009 and said business was growing every month.

"We are now planning to start queer-friendly brunches, fashion shows, painting and photo exhibitions. There is a pot of gold at the end of this rainbow," he said.

While gay activists say it is still early days for the pink rupee, they believe things are changing.

"I am glad that parties, tourism and merchandise are helping the gay rights movement to gain visibility," said Yashwendra Singh, who runs a beauty salon for homosexuals in Faridabad town on the outskirts of New Delhi.

He also runs a grooming training centre for homosexuals that has enrolled more than 70 students since last year.

"We want to help people set up their own salons for a small fee," he said.

K. D. Das, a professor at Jawaharlal Nehru University's Centre for Economic Studies and Planning in New Delhi, said the pink economy in India will really take off if legal issues are completely settled.

"Thousands of middle-class gays will come out of the closet and enterprises will mushroom," he said. "No one wants to miss out on the opportunity to develop a tailor-made strategy to make money."

The Most Gay-Friendly City in the World is - Sydney!
A survey of the world's best gay-friendly cities has placed Sydney at the top of the list.
READ MORE

Bank on This Financial Company as the Most Gay-friendly Employer
In a recent survey that sought to find out the best employer in the Stonewall Workplace Equality Index 2009, Lloyds TSB, has emerged number one as UK's top most gay-friendly employer.
READ MORE

Gay-friendly Campus Planned in Chicago
School authorities in Chicago are hoping to ensure a gay-friendly campus in an attempt to stem drop-out by bullied gay students.
READ MORE