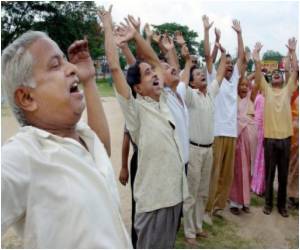 A new study has said that exercise alone proved a far more powerful tonic for heart patients than creatine supplements to increase their muscle strength during rehabilitation.

They claimed that while creatine supplements have been beneficial for athletes in gaining stronger muscles, but it does not show similar effects in cardiac patients, who undergo heart-training workouts as part of rehabilitation.

Drs Cornelissen and Defoor along with colleagues created a double blinded, randomised placebo controlled trial to test the effects of creatine supplements used alongside an exercise programme.


The study focused on patients with coronary artery disease or chronic heart failure over a three-month period.

Heart attack is the death of the heart muscle due to loss of blood supply. Heart disease is the leading cause of death in the United States. Other names for heart attack include acute myocardial infarction, coronary thrombosis, and coronary occlusion.
Advertisement
The researchers wanted to find out whether creatine would help with cardiorespiratory endurance, muscle strength and endurance during a cardiac rehabilitation programme, too.

They reasoned that test results for older patients and cardiac patients may are likely to be lower due primarily to peripheral muscle weakness, and so giving these muscles a creatine boost may lead to more effective rehabilitation fitness results.

As well as measuring aerobic power, strength, endurance and recovery, the researchers looked at patients' quality of life scores and checked they were taking the supplements or placebos according to schedule.

The bottom line was that among the 80 patients in the study, the researchers found no significant differences between the two groups.

"Contrary to our hypothesis, the magnitude of increase in muscle strength and/or endurance was not greater in the group with creatine supplementation," said study supervisor, Professor Luc Vanhees.

The rehabilitation programme led to better leg strength, and endurance and recovery and VO2 peak were significantly higher than when patients started.

It may be the case that the large effect of the exercise training covered up any smaller effect that was down to the creatine.

The researchers also think it is worth considering a therapeutic role for creatine once cardiac patients are already well established with their rehabilitation programme, as it may further boost their performance and let them get past the 'training hump,' although further study is needed to test this hypotheses.

The results appear in the journal Clinical Rehabilitation.

Heart diseases that are present at birth are called " Congenital heart diseases".
Advertisement
<< Vendors Who Use Chemicals to Ripen Fruit Face Jail Sentence
Strategy for the Treatment of Patients With Ulcerative Coli... >>

Find a Doctor Pregnancy Confirmation Calculator Sanatogen How to Reduce School Bag Weight - Simple Tips Blood Donation - Recipients Hearing Loss Calculator Accident and Trauma Care Loram (2 mg) (Lorazepam) The Essence of Yoga Vent Forte (Theophylline)
This site uses cookies to deliver our services.By using our site, you acknowledge that you have read and understand our Cookie Policy, Privacy Policy, and our Terms of Use  Ok, Got it. Close
×