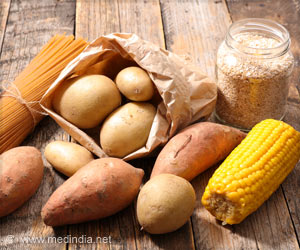 New study conducted by lead author Anna E. Arthur, a professor of food science and human nutrition at the University of Illinois explores carbohydrates' impact on head and neck cancers.

High carbohydrate consumption and glycemic load were associated with increased risk of mortality from any cause among people with cancers in stages 1 to 3, but not in patients with stage 4 cancers.

Advertisement
‘Eating moderate amounts of fats and starchy foods such as whole grains, potatoes and legumes after treatment could have protective benefits, reducing patients' risks of disease recurrence and death.’

In the study, researchers tracked the pre- and post-treatment diets and health outcomes of more than 400 cancer patients. Participants were followed for an average of 26 months after they were first diagnosed and treated for squamous-cell carcinoma of the head or neck; all were patients of the University of Michigan Head and Neck Specialized Program of Research Excellence. The study was published recently in the International Journal of Cancer.


Participants' typical intake of food, beverages and supplements was assessed for the year prior to diagnosis and for one year post-treatment using the Harvard Food Frequency Questionnaire. Patients who consumed the lowest amounts of simple carbohydrates - which included refined grains, desserts and sugar-sweetened beverages - consumed about 1.3 servings daily, compared with about 4.4 servings by patients who were considered high intake.
Advertisement
Patients who consumed the most total carbohydrates and sugars - in the forms of sucrose, fructose, lactose and maltose - in the year preceding cancer treatment were at greater risk of mortality from any cause during the follow-up period, Arthur said. Among the study population, the most commonly diagnosed cancers were in the oral cavity and the oropharynx, which includes the tonsils, the base of the tongue and surrounding tissues. More than 69 percent of participants were diagnosed when the disease was at stage 3 or stage 4. Patients' average age at diagnosis was about 61.

During the follow-up period, more than 17 percent of patients experienced recurrence of their cancer, and 42 patients died from it. Another 70 participants died from other causes, according to the study. Associations among carbohydrate intake and patient outcomes differed by cancer type and stage, Arthur said.

"Although in this study we found that higher total carbohydrate and total sugar were associated with higher mortality in head and neck cancer patients, because of the study design we can't say that there's a definitive cause-effect relationship," said Arthur, who also is an oncology dietitian nutritionist with the Carle Cancer Center at Carle Foundation Hospital in Urbana, Illinois. "The next step would be to conduct a randomized clinical trial to test whether carbohydrate restriction has a protective effect on survival rates." Consuming a moderate amount - about 67 grams - of various forms of fat and starchy foods daily after cancer treatment appeared to provide some beneficial effects, lowering participants' risks of mortality and cancer recurrence.

"Our results, along with the findings of other studies, suggest that diet composition can affect cancer outcomes," said co-author Amy M. Goss, a professor of nutrition sciences at the University of Alabama, Birmingham. "We'd like to determine if this is true using a prospective, intervention study design and identify the underlying mechanisms. For example, how does cutting back on sugar and other dietary sources of glucose affect cancer growth?"

The study is believed to be the first to provide observational data on the therapeutic potential of carbohydrate-restricted, higher fat diets on head and neck squamous-cell cancers. Five-year survival rates among these patients continue to be low, in part because these cancers are often detected in later stages, putting patients at high risk of recurrence. "This observational study is noteworthy because it focuses on a serious cancer that is difficult to treat, and little is known about how nutrition can best help a patient battling it," said co-author Dr. Laura Q. Rogers, a professor of nutrition sciences at Alabama, Birmingham. "This study reiterates the importance of additional intervention studies that test optimal diet recommendations for cancer survivors."

More News on:
Low Carbohydrate Diet Cancer and Homeopathy Cancer Facts Cancer Tattoos A Body Art Diet and Nutrition for Healthy Weight Loss Diabetes Type 2 and Its Link to Sugar-Sweetened Beverages Carbohydrates and Its Role in Obesity Diet Guidelines for Healthy Snacking Sugar: Time to Look beyond Its Sweetness

Right Types of Carbohydrates
Eating the right carbohydrates is the golden secret to good health. Instead of a no-carb diet ......

Quiz on Head and Neck Cancer
Head and neck cancers begin in squamous cells that line the moist, mucosal surfaces inside the head ...

Good vs Bad Carbohydrates
Carbohydrates form an integral component of a healthy diet but there is a lot of discussion about .....