Can't Resist a Sinful, Dark Chocolate Cake? It's Not Your Fault 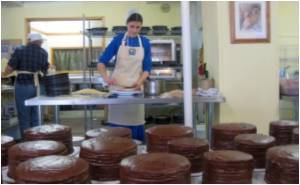 Despite the strict diet, do you still find it impossible not to bite a piece from that sinful, dark chocolate cake? Scientists have revealed why this temptation is just too strong to resist?

Professor Ray Dolan and his colleagues have shown that increased levels of dopamine - a chemical in the brain involved in mediating reward, motivation, and learning through reinforcement - affects our will power and makes us act impulsively.

Philadelphia, February 3, 2010 - People have typically viewed the benefits that accrue with social status primarily from the perspective of external rewards.
Advertisement

The research may explain why people affected by conditions such as Attention Deficit/Hyperactivity Disorder (ADHD) show extremely impulsive behaviour or why such behaviour can be a potential negative side-effect of L-dopa, a drug used to help alleviate the symptoms of Parkinson's disease.


In a study, the team administered low dose of L-dopa and then placed the subjects on a placebo.

The results showed that when asked to make a choice, say, receiving 15 pounds in two weeks, or a 'larger, later' option, such as receiving 57 pounds in six months, every subject was more likely to behave more impulsively - choosing the 'smaller, sooner' option when the levels of dopamine were high.

The urge to seek out new and thrilling experiences is triggered by levels of dopamine in brain, shows a new study.
Advertisement
"Lowering dopamine levels may be able to reduce impulsivity, but we need to be certain that this didn't come at the expense of other, important functions," explains Dr Alex Pine, first author of the study.

The study is published today in the Journal of Neuroscience.

Need for Constant Stimulation Triggered by Dopamine in the Brain

Our need for stimulation and dopamine's action upon the brain are connected, which explains why people who constantly crave stimulation are in danger of addictive behaviour.
Advertisement
<< Research Proves That Women Turn Smarter When Ovulating
Sleep Helps the Brain Restore the Body's Energy >>