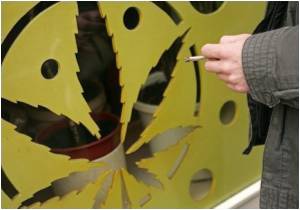 Use of cannabis can cause a temporary cognitive breakdown among non-psychotic individuals, leading to long-term psychosis, according to researchers.

The results reinforce the researchers' model where cannabis users suffering from schizophrenia actually may have higher cognitive abilities than non-cannabis using schizophrenics. This difference may indicate that the cannabis-user group did not have the same mental propensity for psychosis.


"While brain activity for both groups was similar, there are subtle differences between schizophrenia sufferers with a history of cannabis use and those who have never used cannabis. These differences lead us to believe that the cognitive weakness leading to schizophrenia is imitated by the effects of cannabis in otherwise non-psychotic people," explained Else-Marie Loeberg, lead author on the article and associate professor of Psychology at the University of Bergen, Norway.

Schizophrenia is a mental disorder characterized by symptoms of thought, behavior and social problems.
Advertisement
The 26 patients involved in the study attempted difficult cognitive tasks while in the fMRI machine. They were asked to listen to different syllables in each ear and try to say which syllable was spoken when instructed to concentrate on either the left or right ear-a difficult task for anyone but particularly difficult for schizophrenia patients who often have impaired attention, limited executive functioning and difficulty in processing verbal cues.

The study showed that schizophrenia sufferers with previous cannabis use had consistently higher levels of brain activity while undergoing these tests as well as a higher number of correct answers.

These results are in line with previous conclusions from the Bergen researchers who support the idea that cannabis users with schizophrenic characteristics do not appear to suffer from the same neuro-cognitive weaknesses as other patients with schizophrenia.

This implies that it is the cannabis use itself that leads otherwise non-psychotic individuals down the nightmarish path towards schizophrenia by imitating the cognitive weakness that is the main risk factor for developing the psychological condition.

They published their finding this week in Frontiers in Psychiatry.

Nearly one in five Americans reportedly use prescription painkillers to experience an instant high. This could lead to the drug abuser turning entirely dependent on the contents of the drug.
Advertisement
<< Philippines Recalls Carcinogen-tainted Korean Noodles
Even People In Thirties Are Prone to Memory Loss >>