Cannabis Use Increases Risk of Psychosis 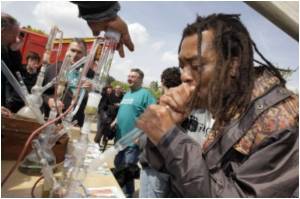 The onset of psychotic diseases like schizophrenia is hastened in cannabis users, says a study done at University of New South Wales. Cannabis is most widely used in Australia with more than 30% people having used it at some point or the other.

About 20,000 patients with psychotic illness were studied and it was found that users of cannabis experienced psychosis 2.5 years earlier than non-cannabis users. The study also claimed that reduction or stopping the use of cannabis could delay the onset or prevent cases of psychosis. This risk is particularly higher among young people whose brains are still developing. The frequency of smoking also increases the risk.

Chief investigator of the study Dr. Matthew Large, said, "What our research has found is that in addition to early cannabis smoking bringing on schizophrenia, it brings schizophrenia on [earlier] by an average of 2.7 years." However scientists have not been able to explain the relationship between cannabis usage and mental illness. Whether cannabis causes schizophrenia or just brings it out among vulnerable people is still unclear. However the study shows clearly that cannabis plays a significant role in psychosis.

Psychotic Symptoms More Likely In Those Who Start Early On Cannabis

Young adults who use cannabis from an early age are three times more likely to suffer from psychotic symptoms.
Advertisement
<< Hearty News for Chocolate Lovers
Popular Kids May Be More Aggressive and Treat Peers Badly >>

Schizophrenia is a mental disorder characterized by symptoms of thought, behavior and social problems.

Vent Forte (Theophylline) A-Z Drug Brands in India Sanatogen How to Reduce School Bag Weight - Simple Tips The Essence of Yoga Diaphragmatic Hernia Calculate Ideal Weight for Infants Blood - Sugar Chart Turmeric Powder - Health Benefits, Uses & Side Effects Blood Donation - Recipients
This site uses cookies to deliver our services. By using our site, you acknowledge that you have read and understand our Cookie Policy, Privacy Policy, and our Terms of Use