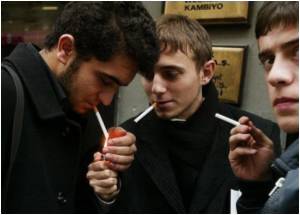 Teenagers and young adults who use cannabis face increased risk of psychosis, research published in the British Medical Journal.

Cannabis is the most commonly used illicit drug in the world, particularly among adolescents, and is consistently linked with an increased risk for mental illness. However, it is not clear whether the link between cannabis and psychosis is causal, or whether it is because people with psychosis use cannabis to self medicate their symptoms.

So a team of researchers, led by Professor Jim van Os from Maastricht University in the Netherlands, set out to investigate the association between cannabis use and the incidence and persistence of psychotic symptoms over 10 years.


The study took place in Germany and involved a random sample of 1,923 adolescents and young adults aged 14 to 24 years.

Drug Abuse Screening Test (DAST) is a screening test to find out if you need professional help with 'Drug Abuse' problem. This is only an anonymous self test.
Advertisement
The remaining participants were then assessed for cannabis use and psychotic symptoms at three time points over the study period (on average four years apart).

There was no evidence for self medication effects as psychotic symptoms did not predict later cannabis use.

The major challenge is to deter enough young people from using cannabis so that the prevalence of psychosis is reduced, say experts from Australia in an accompanying editorial.

Professor Wayne Hall from the University of Queensland and Professor Louisa Degenhardt from the Burnet Institute in Melbourne, question the UK's decision to retain criminal penalties for cannabis use, despite evidence that removing such penalties has little or no detectable effect on rates of use. They believe that an informed cannabis policy "should be based not only on the harms caused by cannabis use, but also on the harms caused by social policies that attempt to discourage its use, such as criminal penalties for possession and use."

The human brain is exquisitely intrinsic and is the seat of all emotions. If you are curious about what makes you bad, sad, silly or glad this quiz on the brain will satiate you.
Advertisement
<< Smoking Elevates Breast Cancer Risk in Postmenopausal Women
Frozen Smoke To Improve Robotic Surgery >>

Selfie Addiction Calculator A-Z Drug Brands in India Iron Intake Calculator Pregnancy Confirmation Calculator Accident and Trauma Care Find a Hospital Blood Donation - Recipients The Essence of Yoga Calculate Ideal Weight for Infants Drug Side Effects Calculator
This site uses cookies to deliver our services. By using our site, you acknowledge that you have read and understand our Cookie Policy, Privacy Policy, and our Terms of Use