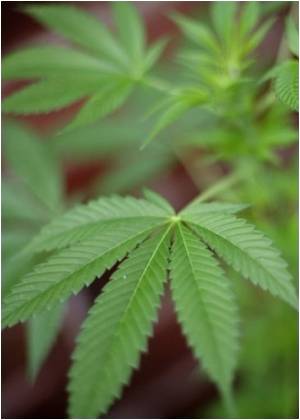 A new study has suggested that the active ingredient in cannabis can help cancer patients regain their appetites and sense of taste.

Researchers in Canada enrolled 21 patients who had been treated with chemotherapy for advanced cancer, and gave them either capsules containing THC -- delta-9-tetrahydrocannabinol, the psychoactive chemical in cannabis -- or dummy lookalike pills.

The volunteers took the tablets for 18 days, and were asked to fill in questionnaires.


Seventy-three percent of those who took the THC reported an increased liking for food and 55 percent said the medication "made food taste better". In the placebo group, these figures were only 30 percent and 10 percent.

'Chemo' means medicine or 'drug'; 'therapy' means 'treatment'. Chemotherapy refers to the use of cytotoxic drugs in cancer treatment.
Advertisement
Both groups consumed roughly the same total of calories, but the THC patients said they ate more protein than before the start of the experiment and enjoyed savoury foods more.

The THC-takers also reported better quality of sleep and relaxation than in the placebo group.

The experiment is small scale but the first to explore the touted qualities of THC through random selection of volunteers and use of a "control" group by which to make a comparison.

Lead investigator Wendy Wismer, an associate professor at the University of Alberta, said the findings were important because cancer, or its treatment, can cripple appetite and lead to dangerous weight loss.

Many cancer patients, for instance, complain that meat smells and tastes unpleasant, so they eat less of it.

"For a long time, everyone has thought that nothing could be done about this," Wismer said in a press release.

"Indeed, cancer patients are often told to 'cope' with chemosensory problems by eating bland, cold and colourless food. This may well have the result of reducing food intake and food enjoyment."

Wismer said that doctors should consider THC treatment for cancer patients suffering from loss of taste, smell and appetite.

THC was well tolerated, and in terms of side effects there were no differences between the THC and placebo groups, which suggests that long-term therapy is also an option, she said.

The study appears in the journal Annals of Oncology, published by the European Society for Medical Oncology.

Cancer, is the second most leading cause of death worldwide. Cancer is not just one disease but many diseases. There are more than 100 different types of cancer. Take this quiz on and test how much you know about cancer.
Advertisement
<< US Supreme Court Rules for Drugmakers on Lawsuits
Pot Smoking Linked to Erectile Dysfunction in Men >>