Cancer Survivor Denied a Smear Test Because She's 'Too Young' 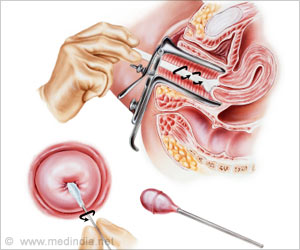 A cancer survivor is demanding the Government to lower the age limit for cervical smears, after being denied a test because she is only 22.

Sophie Evans, 22, was diagnosed with a tumor as a 16-year-old after initially being told she was expecting a baby. But when the pregnancy test came back negative, doctors discovered a 10cm tumor in her stomach, and she had to undergo nine weeks of chemotherapy.

Cervical cancer is the second most common cancer among women and is the primary cause of cancer-related deaths in developing countries
Advertisement
‘Statistics show that around 3,000 women are diagnosed with cervical cancer every year with a sixth of them under the age of 25.’

Evans still has regular hospital check-ups and had recently started feeling lethargic. But despite having symptoms of cervical cancer, doctors at the Moss Green Surgery in Bentilee, refused to give her a smear test, because she is under the age of 25.


Evans said, "It's just upsetting that when I have some of the symptoms of cervical cancer and experience of cancer, I can't have a smear test."

"My GP surgery offered me a swab, but that only picks up infections. A smear test goes right inside and can check for things like cervical cancer. To me, it's clear what I needed. My protein levels were high; I was getting lethargic. These are all warning signs."

Pap smear is the most common test used in screening cervical cancer caused by an infection with human papilloma virus. Pap smear should be repeated every 1 to 3 years till the age of 65 years.
Advertisement
"Women who are under the age of 25 should be able to have a smear test if they want it," said Evans.

In 2003, the Advisory Committee on Cervical Cancer advised increasing the minimum screening age from 20 to 25.

A spokesman for Public Health England said screening women under the age of 25 may do more harm than good. This has prompted several high-profile campaigns to try to persuade the government to lower the age for smear tests.

But a Department of Health spokesman said: 'Evidence shows screening women under the age of 25 can do more harm than good, which is why lowering the age is not something that's being considered.'

Steps To Fight Against Breast And Cervical Cancer Taken In Niger, West Africa

The World Health Organization (WHO) says some 8,000 new cancer cases are recorded each year in the poor Sahel country with a life expectancy of 56 years.
Advertisement
<< Disney Soon To Discontinue Frozen-Themed Champagne Style Non...
Researchers Identify Areas of Plague Risk in Western United... >>

Developed by Dr. Surendra Shastri and his team at Tata Memorial Hospital in Mumbai, the test can reduce the cervical cancer death rate by 31%.

Turmeric Powder - Health Benefits, Uses & Side Effects Drug Interaction Checker Nutam (400mg) (Piracetam) Diaphragmatic Hernia Loram (2 mg) (Lorazepam) Drug - Food Interactions Post-Nasal Drip Accident and Trauma Care Find a Hospital The Essence of Yoga
This site uses cookies to deliver our services. By using our site, you acknowledge that you have read and understand our Cookie Policy, Privacy Policy, and our Terms of Use