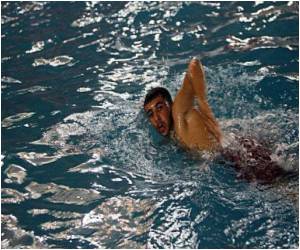 A new study has said that taking a dip in indoor chlorinated pools may induce genotoxicity (DNA damage that may lead to cancer) as well as respiratory problems.

However, the authors of the study claimed that the positive health effects of swimming could be maintained by reducing pool levels of the chemicals behind these potential health risks.

The study is the first to provide a comprehensive characterization of disinfection by-products (DBPs) in an indoor pool environment and the first to study the genotoxicity of exposure to these chemicals among swimmers in an indoor chlorinated pool.


DBPs form in pool water from reactions between disinfectants such as chlorine and organic matter that is either present naturally or is introduced by swimmers, such as sweat, skin cells, and urine.

Bile duct cancer occurs either within the liver or the point where the bile ducts emerge from the liver or outside the liver.
Advertisement
Previous epidemiologic studies have found an association between exposure to DBPs in drinking water and risk of bladder cancer, and one such study has found this association for dermal/inhalational exposure such as occurs during showering, bathing, or swimming.

The new study details a comprehensive investigation of DBPs and mutagenicity of water samples collected from two indoor pools, one disinfected with chlorine, the other with bromine.

In addition, short-term changes in biomarkers of genotoxicity and respiratory effects were studied in swimmers who swam in the chlorinated pool.

Evidence of genotoxic effects was seen in 49 healthy adults after they swam for 40 minutes in the chlorinated pool.

Specifically, researchers found increases in two genotoxicity biomarkers relative to the concentration of the most common types of DBPs in exhaled breath, which were used as a measure of the swimmers' exposures.

The biomarkers that increased were micronuclei in blood lymphocytes, which have been associated with cancer risk in healthy subjects, and urine mutagenicity, which is a biomarker of exposure to genotoxic agents.

Detailed measurements were also made of the most common exhaled DBPs (trihalomethanes) in air around the pool and in exhaled breath of the swimmers before and after swimming.

Researchers measured several biomarkers of respiratory effects after swimming and found changes in only one-a slight increase in serum CC16, which suggests an increase in lung epithelium permeability.

This result was explained by the effects of exercise itself as well as exposure to DBPs.

In addition, the authors identified more than 100 DBPs in the pool waters, some never reported previously in swimming pool water and/or chlorinated drinking water.

In vitro assays showed that the swimming pool water was mutagenic at levels similar to that of drinking water but was more cytotoxic (can kill cells at a lower concentration) than drinking water.

The study has been published in a set of three articles in the peer-reviewed journal Environmental Health Perspectives (EHP).