Cancer Prevention Still Lags Behind, but Mortality is Reduced 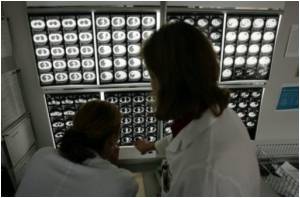 Cancer incidence increased by almost 20%, from 2.1 million new cases in 2002 to 2.5 million in 2008 although overall mortality from cancer decreased in the European Union.

These are the findings of a special issue of the European Journal of Cancer (the official journal of ECCO - the European CanCer Organisation) on cancer prevention, published today.

PSA blood test is specific to prostate gland but not necessarily a cancer specific test but is commonly used to diagnose prostate cancer.
Advertisement

The current economic crisis threatens to affect cancer incidence in a number of areas, says a paper by Dr. José M. Martin-Moreno from the University of Valencia, Spain, and colleagues. Public donations to cancer research funded by charitable organisations will fall, and governments as well as the pharmaceutical industry are likely to cut research and development budgets, say the researchers.


The prospects for disease caused by occupational exposure to carcinogens are also likely to worsen, they say. "Both private companies and governments tend to take shortcuts in occupational safety controls during periods of economic hardship," said Dr. Martin-Moreno "and this is especially true for small companies and in developing countries."

Treatment options of prostate cancer includes waiting, surgery, radiation, hormone therapy, chemotherapy, cryosurgery or biologic therapy.
Advertisement
For example, a Korean study [2] carried out in the late 1990s linked the reduction of health and safety costs directly to the ability to avoid bankruptcy. "This exemplifies the terrible choice businesses have to make in times of economic downturn - reduced safety for workers or economic ruin," said Dr. Martin-Moreno. For industries with potentially high levels of carcinogenic contamination such as mining this effect is compounded, he said.

Cancer prevention, like cancer itself, encompasses a large number of diverse factors including lifestyle choices, genetics, environment, occupation, infections and access to preventive healthcare, the researchers say. Cancer control efforts, therefore, can overlap with everything from the control of hypertension to the reduction of greenhouse gases. Unless forceful action is undertaken now, the cancer burden will only continue to grow, leading to enormous human cost and placing an unsustainable burden on health systems.

However, prevention efforts can also be more effective in times of crisis. As people give up or reduce unhealthy lifestyle habits in order to reduce costs, they may be particularly receptive to new and healthier choices, say the researchers. "Governments could also play their part by taking the opportunity to levy higher taxes on tobacco, alcohol and other unhealthy goods like trans fats or processed sugar and channelling the revenue thus derived towards job-creating disease prevention and social welfare programmes," said Dr. Martin-Moreno.

The issue places special emphasis on the need to address cancer prevention using a holistic and global approach, focusing on the 'big four' risk factors of smoking, obesity, alcohol and physical inactivity. This represents a fundamental shift away from the reductive approach of earlier research, which meant looking narrowly, often in isolation, at multiple micro-components of diet and lifestyle, say the editors.

A paper by Dr. Esther de Vries, from the Department of Public Health, Erasmus Medical Centre, Rotterdam, The Netherlands and colleagues, looks at the impact of preventing weight gain and increasing physical activity on colon cancer incidence in seven European countries. The researchers used the PREVENT [3] statistical modelling method to make projections of future colon cancer incidence, both with and without realistic intervention scenarios involving physical activity and BMI reductions. Data studied came from cancer registries in the Czech Republic, Denmark, France, Latvia, The Netherlands, Spain, and the United Kingdom.

"Yet we know that large numbers of colon cancer cases could be avoided by reducing exposure to risk factors, two of the most easily controllable of which are related to physical inactivity and excess weight," said Dr. Andrew Renehan, from the University of Manchester, United Kingdom, one of the co-authors of the paper. While these risk factors are clearly intertwined - in general, physical inactivity increases with increasing body mass index (BMI) and increased physical activity contributes to avoidance of weight gain - increased physical activity does not necessarily result in weight reduction in overweight people.

"The predictive modelling is beginning to tease out the independent relevance of each of these factors in the prevention of colon cancer," said Dr. Renehan.

In the hypothetical scenario where overweight and obesity levels in European countries increased during the period 2009� at the same rate as has been observed in the US, the projected increase in rates of colon cancer ranged between 1.7 (UK) and 2.8 more (Spain) cases for 100,000 person-years for males. Increases for females ranged from 0.1 (Czech Republic) and 0.6 more cases (The Netherlands) per 100,000 person-years. These rates would translate to increases in numbers of new colon cancer cases of between 0.7 and 3.8%, the researchers say.

"We found interesting patterns in these models," said Dr. Renehan. "Preventing weight gain and encouraging weight reduction would seem to be most beneficial in men, but for women a strategy with a great emphasis on increasing physical activity would be more effective."

Throughout the various papers in the special issue, the authors understand that modifying lifestyle is difficult. "We can safely say increasing physical activity across Europe to the level already achieved in The Netherlands, where everyone cycles, would be of substantial benefit," said Professor Jan-Willem Coebergh, from Erasmus University, The Netherlands, and one of the co-editors. "But we will always need sound evidence before prevention strategies can be implemented," he added.

Professor Michael Baumann, from the University Hospital and Medical Faculty, Dresden, Germany, and ECCO President, said: "Cancer prevention may not be foremost in the policy-makers' minds at present, but right now it is more relevant than it has ever been before. The recession confronts them with a clear choice - either to introduce short-term cost-containment strategies, which will simply increase long-term costs, or to use the financial crisis as an opportunity to strengthen evidence-based prevention policies. We hope that the evidence so amply provided in this special issue of the EJC will help make them decide to follow the right road and take a major step towards reducing the incidence of cancer in Europe over the years to come."