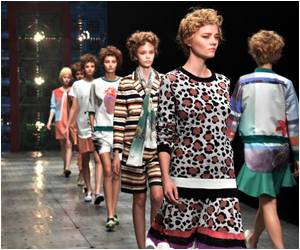 Chantelle Winnie, a young Canadian model, takes up the fashion world by storm. She loves an English breakfast of sausage, bacon and egg and is the It girl of diversity in a world pilloried for brutal uniformity.

Diagnosed with vitiligo aged four, the same skin disorder Michael Jackson had, she overcame bullying and years of rejection to achieve her dream of becoming an international model.

Plucked from obscurity to appear on "America's Next Top Model" and chosen last year as the face of Barcelona label Desigual, she loves every second of her whirlwind, "amazing" life punctuated by lots of sleep and her mother's breakfasts in Toronto.


The 20-year-old has crossed dreams off to-do lists, but the biggie remains: gracing the cover of fashion bible American "Vogue," whose steely editor in chief Anna Wintour she has not met. Yet.
Advertisement
Bubbly and prone to loud guffaws of laughter, Winnie projects a girly exterior that belies a cast-iron determination.

She has become a spokeswoman for vitiligo, which causes white patches to appear across the body and affects up to two million Americans, and has learned to be proud of who she is.

"I could more label myself as even a spokeswoman for happiness!" she tells AFP in a New York hotel overlooking a gritty, wintry skyline of Manhattan.

But it has not been an easy journey to the catwalk for Desigual on Thursday, the first day of fall/autumn 2015 New York Fashion Week.

-Brought up by single mom-

Brought up by a single mother hairdresser, she flew regularly to see her father who comes from Jamaica and has a house in Atlanta.

"We lived on our own for a very long time and those are my happiest years, me and my mom," she said.

But she was badly bullied at school and as a teenager was rejected by every modelling agency in Toronto.

Like any self-respecting wannabe, she built a profile on social media where she was discovered by ex-model Tyra Banks, presenter of long-running TV reality show "America's Next Top Model."

Winnie was booted off the show in 2014 but Banks is clearly a huge inspiration and the two have remained close.

"You were already a star. I just gave you a platform to make sure people recognized that you were. Keep making me proud," she says, fishing out her cell phone to read a message from Banks.

"That really touched me," she adds.

The fashion world has long been blamed for a multitude of sins: eating disorders, the cult of thinness, an image of perfection that ordinary women can never obtain and of being too white.

Although Winnie's pigmented face is striking, she has the classic figure of a model -- five feet 10 inches (1.78 meters) with coltish limbs, chiseled cheekbones and a tiny waist.

A model with Downs Syndrome features in New York this week. Plus-size models are more common in magazines and New York Fashion Week has clamped down on harsh working conditions for child models.

"Even the top models right now have a lot of personality and I feel like that's what people are looking for, you know, something they can relate to, a real person," says Winnie.

"So I feel like the industry is very much opening up, widening their eyes."

She describes Desigual as family.

"It was very organic, you know. They just met me, fell in love with me and they were like yep we're keeping you, you're ours now."

The label's signature bold patterns and bright colors suit her personality but at heart she is a sweatpants and sneakers kind of girl.

She doesn't dwell on bad things in the past and says her message to young girls is: "Focus on your opinion of yourself and not the opinion others have of you."

When she visited her old middle school she was mobbed. "A lot of the kids were like 'Oh my God, you're her, you're that girl!'"

She laughs again. She gives the impression of a homebody who loves to sleep and loves being coddled by her mom when she is home.

There she tucks into her mother's English breakfast of tea, beans, sausage or bacon, and runny eggs -- all protein -- and just the occasional piece of brown toast to dip into the eggs.

"The rest of the day I'll have like tonnes of spinach," she laughs. "But protein and vegetables, that's kind of my diet."

Healthy Grooming - An Art Beyond Fashion
Good grooming is mired in the belief that 'God exists in the details'...