Canadian Inuit Not Immune to Obesity 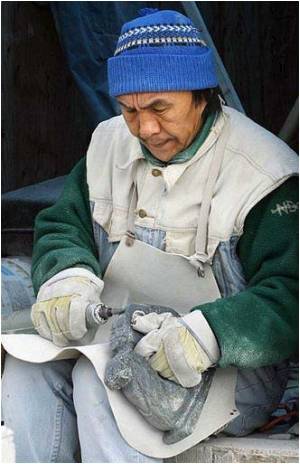 In an article published in Canadian Medical Association Journal it was found that Canadian Inuit are not protected from the health effects of obesity and their diabetes levels are similar to those in general population.

Comprehensive data for Canadian Inuit are lacking, but diabetes rates among Inuit in Alaska and Greenland have been increasing and are comparable to rates in the general population. Previously, diabetes among Inuit throughout the Circumpolar North was rare.

Researchers from McGill University in Montr'al, Quebec and the University of Toronto, Toronto, Ontario looked at data on 2595 participants in 1901 households in the Northwest Territories, Nunavut and Labrador to understand the prevalence of high blood sugar levels. The average age of a participant was 43.3 years, and 61.5% of participants were women. The authors looked at chronic disease risk factors by region, sex and age.


The data were part of the large International Polar Year Inuit Health Survey for Adults 2007, a health survey expedition that covered more than 10 000 km and included 36 communities as part of a response to a request from Inuit for health data on their people.

Diabetes has replaced every other condition to become the fastest growing lifestyle disease, globally. This disease also impacts children. Some people are more inclined to develop diabetes than others. Do you belong to the high- risk group? Spend 5 minutes to find out.
Advertisement
Twenty-eight per cent of Inuit were overweight, 35% were obese and 43.8% had what is considered an unhealthy waist size based on standards for Caucasians. Smoking and alcohol consumption were high for people under the age of 50 and 25% of participants had elevated triglycerides (blood fat levels). In Inuit under the age of 50 who had a mean age of 34.3 years, 1.9% had diabetes, similar to the rate of 2.4% for 35-year-old Canadians. In Inuit 50 years of age or older who had a mean age of 61.2 years, 12.2% had diabetes, comparable to the rate of 15.7% for similarly aged Canadians.

The health investigators found that people with a large waist girth and a high level of a type of fat in the blood called triglycerides were at greatest risk for prediabetes and diabetes. The authors suggest that having a high triglyceride level with a large waist girth is a marker of fat accumulating around the organs, and this type of fat is more dangerous for one's health than subcutaneous fat.

"Our findings suggest that the prevalence of diabetes among Canadian Inuit is higher than previously recognized, but remains lower than that observed among First Nations people," writes author Dr. Grace M. Egeland, Centre for Indigenous Peoples' Nutrition and Environment, School of Dietetics and Human Nutrition, McGill University, with coauthors.

"Further, our findings suggest that Inuit ethnicity does not protect obese people from development of diabetes," they conclude.

Canada's Inuit Coming Down With Tuberculosis