Can Suicides Be Prevented At Metro Stations? 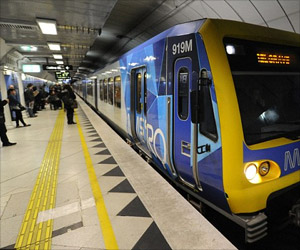 Closed-circuit television (CCTV) footage at the metro rail stations help in preventing suicides. The abnormal behavior of the suiciders can be easily identified through CCTV system.

In all urban rail transit systems, suicides have become more common. There are no physical barriers to block the attempters. Though the suiciders do not die, they suffer severe injuries, says a study published in the open access Journal BMC Public Health.

For every 10 to 20 instances of temporary gun seizures, one suicide was prevented, suggested a new study.
Advertisement
‘Suicides can be prevented by identifying the behavioral patterns of the suiciders with the help of CCTV at metro stations.’

"We conducted a two stage study to first identify behaviors associated with attempted suicide and second, to test if these behaviors could be used to spot people, who go on to attempt suicide, with minimum false identification of people, who were not going to attempt," said lead study author Brian Mishara from the University of Quebec in Montreal, Canada.


"We found the presence of two or more behaviors indicating the suicide risk leaving objects on the platform, frequently looking down the tunnel, standing for long periods of time on the yellow line or continually walking on the yellow line, looking physically agitated, staring at the tracks or the tunnel for long periods of time and seeming depressed," Mishara added.

The protesters were accompanied by villagers and members of local council in Kerala. They demanded the case be handed over to CBI for a fair investigation.
Advertisement
According to the researchers, 24 percent of attempters could have been spotted and possibly prevented by people looking for these behaviors on the CCTV footage.

In the first part of the study, the researchers were given access to multiple camera CCTV footage of 66 previous suicide attempts from a metro station in Montreal, Canada.

Fourteen attempts were randomly selected and used to draw up a list of associated behaviors, which were then validated and agreed by four independent observers, who then proceeded to analyze all the cases. Several behaviors were obvious to spot but others, such as intoxication, physical agitation, anxiety and depression may have required interpretation by the observer.

In the second part of the study the researchers showed 33 independent observers single-camera footage, from 63 previous suicide attempts. "The observers only spotted indicating behaviors from our list in 53 percent of the videos they viewed where actual suicide attempts took place," noted Mishara.

"Several of these behaviors have the potential to be detected automatically using computer technology. So our study provides ground work for research to develop novel ways to prevent suicide attempts at metro stations," explained Mishara.

Even when men and women try to kill themselves using the same method, men are still more likely to die.
Advertisement
<< Indians are More Prone to Die from Heart Attacks and Stroke...
New World Record in Treating Social Anxiety Disorders >>

On May 7, four female athletes tried to commit suicide at the Sports Authority of India's water sports center at Alappuzha in Kerala, South India.