Cambodians Fight Malaria Now With the Push of a Button 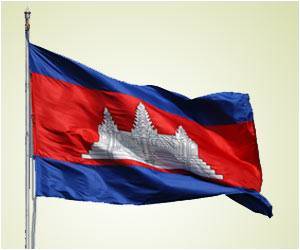 Cambodian villagers are armed with their mobile to fight with malaria.

In the small village of Phnom Dambang near the Thai border, locals know that early detection and treatment is crucial to containing the virulent strain of the mosquito-borne disease that is blighting the region.

"The malaria here... can kill people in a short period of time if we don't have the right treatment," said Long Vuthy, whose home doubles as a walk-in clinic. The village is dotted with bright yellow signs emblazoned with pictures of mosquitoes, warning that the disease is prevalent in the area.


Vuthy, 41, who is also the chief of the village in Pailin province -- considered to be at the epicentre of drug-resistant malaria in Cambodia -- is one of more than 3,000 volunteer malaria workers in the country.
Advertisement
They diagnose the disease with a quick blood test and provide treatment, free of charge, in remote parts of the impoverished nation, where access to health services can be difficult.

Under a new pilot project, he is now also using a dedicated text message service to report new cases, allowing health experts to monitor and respond to patients' needs in real time.

"It's a very good way to help the community," said Vuthy, who was taught how to use the mobile phone service two months ago by the Malaria Consortium, a non-profit group working with the government and the World Health Organisation (WHO) to eradicate malaria from the country by 2025.

But the prevalence of the drug-resistant strain has caused concern.

Malaria resistant to regular forms of treatment was confirmed in western Cambodia eight years ago, likely as a result of patients taking an incorrect or incomplete course of anti-malarial drugs.

To control the spread of this drug-tolerant form, health workers must catch cases early and ensure patients strictly follow the right treatment plan.

The alert system is simple. If Vuthy's diagnosis test shows a person has malaria, he immediately starts them on medication and composes a message with the patient's age, sex, location and the type of malaria.

Using a toll-free number, the text is sent instantly to the district health centre, provincial health officials and a national malaria database in the capital Phnom Penh -- a process that used to take a month.

The information is also fed into Google Earth to create a map of reported cases and of potential hotspots of resistance.

Together, the data helps officials track each case and make sure the right treatment is available or that more medication is supplied when stocks are running low.

"I think this system is very important in eliminating malaria in Cambodia because it provides information very fast," said Pengby Ngor from the Malaria Consortium, which developed the database. "In this way there can be intervention and the patient can get treatment quickly."

Malaria killed an estimated 655,000 people worldwide in 2010, although mortality rates have fallen sharply over the past decades, according to the WHO.

Researchers attribute this decline largely to the increased use of artemisinin drugs, seen as the most effective treatment, and the widening use of insecticide-treated bed nets -- which have also been distributed by the Cambodian government.

Comprehensive data on resistance in the country is unavailable, although a study by international scientists published in The Lancet this year found that between 2007 and 2010, 42 percent of falciparum malaria cases, the most severe form of the disease, in western Cambodia were drug tolerant.

Resistance does not mean the disease will be fatal, but it typically takes longer to be cured using a combination of drugs.

Meas Tha, deputy director of the National Centre for Parasitology, Entomology and Malaria Control, said the mobile pilot scheme was a "tool that could help us to achieve our 2025 goal" to eradicate malaria, alongside other key efforts such as education on prevention and medication.

It is part of a national malaria containment project on which the Global Fund, supported by The Bill and Melinda Gates Foundation, has spent some $30 million since 2010.

The system, using SIM cards provided free by Cambodian telecommunications firm Mobitel, was launched in three other provinces last year before coming to Pailin in July.

Some 230 volunteers have used the mobile phone service so far and there are plans to eventually include all volunteers in the project.

Vuthy knows that close monitoring of severe malaria cases is essential in his part of the country.

He makes sure his patients take their pills correctly and he carries out follow-up tests to check their blood is parasite-free after three days. If not, it could be a sign of drug tolerance, requiring further treatment.

Here too the text message alert service comes in handy, sending reminders to check on patients on set days. "It makes my job easier," Vuthy said.

Mosquito Diseases
News Archive
News Resource
Advertisement
News Category
Milestone In Voluntary Blood Donation Achieved Samsung Reinvents Toilet for the Poor Which is a Better Form of Exercise: Daily or Weekly? First Phase of Foot-and-Mouth Disease Vaccination Shocking News: Polio Cases Return After a Decade in the US
More News
Sign up for Wellness Consult a Doctor Sign up for Selfcare