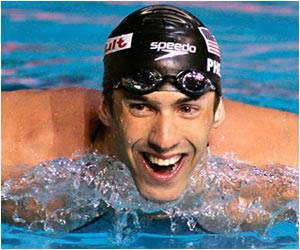 Michael Phelps does not 'count calories' when he wants to eat something, the swimming champion revealed.

The swimmer opened up about how he gained 25 pounds after winning eight gold medals at the Olympic games.

Golden Olympian Michael Phelps Has Apologizes to His Chinese Fans

As many of you know, I recently engaged in behaviour which was regrettable and not what people have come to expect from me, said Phelps to media.
Advertisement

"Whether it's Sour Patch Kids or Reese's or a bag of chips, if I feel like eating it, I'm going to eat it," Fox News quoted the Olympic swimmer as telling to Details magazine.


The Olympic swimmer also reveals some of his pre-race methods are less than traditional.

US Swimmer Michael Phelps Not to be Charged Over Smoking Bong

US swimmer Michael Phelps will not face charges over a photograph apparently showing him smoking cannabis.
Advertisement
Phelps felt on top of the world after his big win in 2008, but he told Details that he certainly experienced some low moments as well.

"At that point, I just didn't have anything. It was weird going from the highest of the high, the biggest point of your life-winning eight gold medals-and then saying, 'All right, where do I go from here?' I wasn't motivated. I did nothing, literally nothing, for a long time," he recalled.

"I gained 25 pounds. A friend of mine and I were playing football on the beach in Miami, and somebody got a picture of us and put it all over the place. And he's like, "Bro, you gotta start working out, man. You are fat."

"I realized that I probably hadn't reached my full potential. There was still more in the tank. As I come to closure on my career, am I going to look back in 20 years and say, 'What if?' That's something I don't want," he said.

"It was a learning experience. I'm the kind of person who has to go through the learning experiences myself. Somebody could tell me, "If you eat this much you'll be fat," and I'd be like, 'Yeah, okay, let me try it.' I'll be the first to say I've made thousands of mistakes, but I've never made the same mistake twice."

Champion swimmer Michael Phelps has been suspended from competition for three months by USA Swimming. Cereal-maker Kellogg announced they would not renew their contract.
Advertisement
<< Lakes Around the World Struck by Global Warming
Oral Immunotherapy May Help Treat Children With Egg Allergy >>