Observers are distressed over the increasing in violence in nursing homes Canada.

Ironically, the threat to the elderly inmates comes from their own fellow occupants, some of whom turn out to be aggressive and violent.

More than 150,000 Canadian seniors were living in residential care facilities across the country in 2004/05, according to figures released by Statistics Canada in the spring of 2007. That's one out of every 30 people aged 65 or older.


The numbers are far higher for people 85 and older  about one in five. And many of them require constant care. Alzheimer's, the most common form of dementia, is estimated to affect one in 20 Canadians over the age of 65 and one in four of those 85 or older.

"The pushing and the shoving, when you're dealing with frail, elderly people, will often end up in serious injury or death," Jane Meadus, a lawyer who has fought to keep violent residents out of nursing homes, told CBC News.

She says an increasing number of people with violent dementia and other illnesses are ending up in the residences because nursing beds are much cheaper and governments have shut down more expensive psychiatric beds.

"The nursing home beds are definitely the cheapest beds around. And they are what I would say is the dumping ground," Meadus said.

The government's own research suggests that one nursing home resident in five is now considered highly aggressive.

During the past 15 years, there have been repeated recommendations for sweeping changes to make nursing homes safer. The recommendations have come from juries at coroner's inquests as well as annual reports from the geriatric and long-term care review committee to the Chief Coroner of the province of Ontario.

In 2005, an inquest looked into the deaths four years earlier of two residents of a Toronto nursing home. They were attacked in their room by a fellow resident who was suffering from dementia. Both men died of blunt trauma to the head. The jury made several recommendations Among them were:

 The Ministry of Health and Long-Term Care should fund specialized facilities, as an alternative to long-term facilities, to care for demented or cognitively impaired residents exhibiting aggressive behaviour.
 The facilities, in consultation with experts in the field, should be designed to meet the physical and staffing requirements of these high-need residents.
 The ministry, in consultation with representatives from the long-term care industry and health care professionals, should develop short- and long-term strategies for the care and treatment of physically aggressive patients with dementia.

The jury also recommended that if a resident is placed in a nursing home and the resident turns out to "have a complexity of care, such as aggressive behaviours, that cannot be safely managed," there should be a mechanism in place to quickly transfer the resident to a facility that has the capabilities to care for the resident.

"Given that the projected number of demented patients requiring institutional care is expected to increase dramatically in the coming years, it is recommended that the Ministry of Health, in consultation with representatives from the long-term care industry and the health-care professions, develop both a short-term and a long-term strategy to manage physically aggressive, demented patients. Inherent in this recommendation is the recognition of the principle that the safety of other vulnerable residents within long-term care institutions must be maximized."

But the government of the province hasn't implemented any of them. The government does not want to build "jails for the elderly," Health Minister George Smitherman says.

"I do understand, of course, the necessity of protecting individuals from one another," Smitherman told CBC News. "We can take appropriate steps to do that, but within an environment of long-term care instead of creating some segregated model where we've got all those individuals in newly built facilities."

Aging Process Could Result in Inappropriate Social Behaviour
Atrophy of the frontal lobes of the brain, a part of the aging process, could also mean shedding of inhibitions and socially inappropriate behaviour.
READ MORE 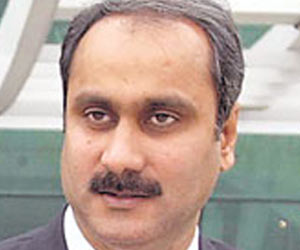