Call To Ease Restrictions on Imports After 'Sperm Drought' in Victoria 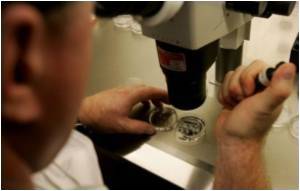 Women in Victoria are finding it difficult to start a family because IVF clinics here are already running low on sperm donor supplies.

Victoria is so short of sperm donors that some women are flying interstate for IVF treatment, prompting calls to ease restrictions on importing sperm, reports the Age.

A number of the state's men have been aroused to become donors, after a report in the local Tasmanian paper about the sperm bank almost running dry.
Advertisement

Fertility doctors said the demand for sperm has surged since laws giving single women and lesbians access to IVF were brought in last year, with some patients waiting up to nine months.


The removal of anonymity has also made some men reluctant to donate, and restrictions that mean they can only give sperm to 10 families have also increased the need for more donors.

College students have come to the rescue of childless couples through sperm donations.
Advertisement
With just 184 registered sperm donors left in Victoria, doctors said some patients are resorting to DIY inseminations using unscreened sperm, which carries the risk of infection.

But states without specific reproductive legislation such as Queensland are routinely importing sperm, often from American sperm banks.

Melbourne IVF director John McBain said the regulator was being too strict with the rules.

"The shortage is as bad as it's ever been and when the wait is so long to get access to a donor it just pushes it underground again and people seek their own remedy using uncounselled, unconsented donors and unquarantined sperm," he said.

"The worrying risk of that is chronic viral illness infection with either hepatitis B or HIV because a lot of single women tend to source gay men as their donors," he added.

"One of the main things ... is that we have minorities here in Australia who would quite like the child to look like its parents but no one has any Indian, Asian or Arabic sperm donors," said McBain.

Louise Johnson, chief executive of the Victorian Assisted Reproductive Treatment Authority, which regulates fertility treatment, said decisions on importation were based on complex legal requirements and the welfare of the child.

Clinics often differ in what they interpret as reasonable costs. State legislation also requires donors to be counselled by a Victorian counsellor before giving sperm.

"'It's not just a simple matter of saying there's a shortage of donor sperm let's import a whole batch," said Johnson.

"'The guiding principles of the act are that the welfare of persons born as a result of treatment is paramount, and they have a right to information about their genetic parents," she added.

"There would be no regulatory body in the US ensuring that their donor's details are kept up to date because there is no central register like there is in Victoria," said Johnson

"'There's a growing body of evidence that young people want to have the choice to obtain information about their donor when they become adults, so it not just the matter of supply," she added.

Children born to a surrogate mother or conceived through donated sperm or a donated egg do just as well psychologically as counterparts who are naturally conceived.
Advertisement
<< 10 Tips On Keeping Your Brain on Its Toes!
Oz Youngsters Plagued By Facebook Stalkers >>