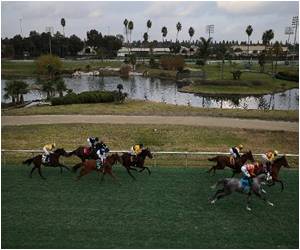 A track that welcomed a record 123,469 people on Preakness Day wears a forlorn look as the crowd is very thin on Friday afternoon at Pimlico Race Course.

Could California Chrome be the one to breathe new life into horse racing in the United States if he becomes the first thoroughbred since 1978 to win the coveted Triple Crown at Belmont Park next weekend?

"Yes, indeed," said 90-year-old Charles Owens, who's been coming to Pimlico -- where California Chrome won the Preakness on May 17, a fortnight after his Kentucky Derby victory -- for the better part of 70 years.


"He looks super. Nothing can touch him. I'm excited as hell about him," said Owens, nibbling on a beef brisket sandwich from a Styrofoam box in the dimly-lit wagering hall deep within the cavernous Pimlico grandstand.
Advertisement
Many horse racing insiders agree, albeit with a heavy dose of caution, given the raft of challenges -- from a proliferation of casinos to animal welfare concerns -- that have taken a toll on the sport of kings in recent years.

"There's still a great deal of interest on the part of the public on our big days and in our big races," said Alex Waldrop, president of the National Thoroughbred Racing Association.

Day in and day out, however, horse racing is hard-pressed to compete against American football, basketball and baseball, even if it remains the only sport in the United States where betting on the outcome is legal.

"For years, we hovered around the 10th most popular sport (position) in America. Now we've dropped a tick or two below that," overtaken by mixed martial arts, Waldrop told AFP in a telephone interview.

While a Belmont win for California Chrome will no doubt stir "a lot of visibility" for horse racing, "we've got many other challenges that face the industry that a Triple Crown winner probably can't overcome," Waldrop added.

Competition from casinos -- which earned $37.43 billion in 2012 from what the American Gaming Association euphemistically calls "consumer spending on gambling" -- is chief among them.

"How many (casino) dice games can you run in a minute? Lots," said Michigan law professor and lifelong racing buff Charles Palmer. "But there's 20 minutes between horse races. It's just not very efficient as a gambling vehicle."

Ten states now allow "racinos" -- race tracks with on-site casinos that offer slot machines and, sometimes, table games such as poker. But skeptics fear horse racing at such venues will, in time, fade into oblivion.

Another factor is cultural.

Unlike their British or Australian counterparts, Americans tend to see a day at the races as a time to gamble -- not a family-friendly opportunity to dress up, step out, dine well and place a few bets on the ponies for fun.

Even an iconic track like Pimlico, controlled by a private-held consortium led by Canadian auto parts tycoon Frank Stronach, feels rather down at heel with its weather-worn seating and long rows of shuttered wagering booths.

Back in the day, race tracks "treated you like they wanted you," lamented John Norwood, a Baltimore air conditioning entrepreneur who, at 55, was a relative youngster Friday among the overwhelmingly male Pimlico regulars.

"I used to come three or four days a week and spend $50 a day," he told AFP while picking up a sandwich at the snack bar. "Now it's just bad. It's nothing like it used to be."

Increasingly, Norwood skips driving to the track in favor of betting online through such sites as Xpressbet, which enables wagering at more than 300 tracks worldwide plus real-time streaming video of the races themselves.

Pimlico now considers 7,500 to be a good crowd on an average day, spokesman Mike Gathagan said, adding that "the big days continue to get bigger" for the double-oval track in Baltimore that opened its gates in 1870.

For six years, Pimlico has significantly beefed up its Preakness attendance with a same-day, all-day infield music festival, headlined by the likes of Train, Bruno Mars, Maroon 5, Macklemore and Ryan Lewis and, this year, Lorde.

In California, longtime race horse owner, trainer and rider Susan Kayne cited another negative factor -- public concern about the welfare of the horses amid revelations of widespread doping.

In a 2012 investigation, The New York Times found that, on average, 24 horses die every week on US race tracks, and that trainers had been caught no less than 3,800 times since 2009 pumping drugs into their horses.

"The drugging and abuse of horses is worse than ever. It's essentially animal abuse for entertainment," said Kayne, who hosts an equine cable television show, "Unbridled."