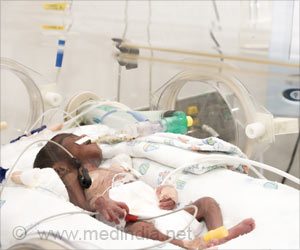 For many, starting the day off with caffeine from a cup of coffee is a must. In neonatal intensive care units, or NICUs, premature babies born under 29 weeks are given a daily dose of caffeine to ensure the best possible start to life. A new study by University of Calgary researchers shows the earlier the dose of caffeine can be given, the better.


‘Early caffeine treatment has no long-term negative effects on neurodevelopment, and is actually associated with better cognitive scores, and reduced odds of cerebral palsy and hearing impairment. ’


Born prematurely at 27 weeks at the Foothills Medical Centre, Kyle and Avril Strachan's baby, Anna, was given caffeine to help her breathe and boost lung function. "The doctors told us, with premature babies, their brain hasn't developed quite enough to let them do all the things their bodies should be doing on its own, like breathing," says mom Avril. "In the first few weeks, when Anna was feeding, she would slow down or even forget to breathe. This would cause her heart to slow and for her to not get enough oxygen."

To help her breathe more easily, Anna needed a continuous positive airway pressure, or CPAP, machine to deliver constant airflow to her lungs.

A 2014 study by Lodha showed starting caffeine therapy within two days after birth shortened the amount of time babies needed to use ventilators. It also reduced the risk of bronchopulmonary dysplasia (BPD), a form of chronic lung disease caused by damage to the lungs from use of a ventilator. What was not known was how that dose of caffeine affected brain development. Lodha collaborated with researchers from the Universities of British Columbia, Montreal, Toronto and Mount Sinai Hospital in Toronto to analyze data from 26 NICUs across Canada. The findings are published in Pediatrics.

The team examined data from follow-up assessments conducted at age 18 to 24 months. During these follow-ups, children were assessed for their cognitive, language and motor development using the Bayley Scales of Infant and Toddler Development, a standardized scoring system to assess developmental functioning in infants and toddlers.

"We look at how children are constructing their understanding, such as solving simple problems or figuring out three-dimensional objects and toys," says Dr. Dianne Creighton, PhD, research assistant professor in the Department of Paediatrics and retired psychologist with AHS. "We also assess how the little ones are able to understand simple words, or recognize the name of a picture, as well as their motor skills like climbing, crawling, balance and co-ordination."

Lodha says it's believed that caffeine may increase the growth of dendrites, the small branches of a neuron that receive signals from other neurons. "Caffeine may also improve better lung stretch and expansion, cardiac output and blood pressure in premature infants, which improves oxygen supply throughout the body and brain, reducing the duration of mechanical ventilation and the risk of chronic lung disease and injury on the developing brain."

Now two years old, Anna has completed multiple follow-up assessments and is participating in dance classes, gymnastics lessons and swimming like a fish, says her mom Avril. "She's very mechanical. She likes to build things, take it apart and figure out how it works," she says. "It's wonderful to know that the caffeine treatment has no adverse effects and that if researchers are getting positive findings, it should continue to be the standard of care for premature babies. In that case, I think parents would have no hesitation in having caffeine as part of their child's treatment."

Longer Stay in ICU can Affect Premature Babies Behavior
Premature babies experience stress and neonatal pain, which impairs both early and later child development due to longer stay in the ICUs.
READ MORE