By 2020 There Could be More Anti-smoking Laws in the US : Study 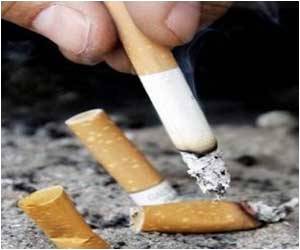 Nearly 50% of the United States has already enforced a ban on smoking in bars, restaurants or workplaces, and more such anti-smoking policies will take shape in the nation by 2020.

Over the past decade, 25 states have enacted laws that prohibit smoking indoors, the Centers for Disease Control and Prevention said in its Morbidity and Mortality Weekly Report.

The Croatian government is to forward to the parliament a tough anti-tobacco bill introducing a public smoking ban, a minister said Thursday.
Advertisement


While restrictions vary from state to state, the CDC projected that if the United States keeps up the pace it has set it could become a near smoke-free country by the end of this decade.

Smokers in Australia's biggest city, already hounded out of bars and restaurants, will now be banned from smoking in their own cars if children are passengers, authorities announced Wednesday.
Advertisement
"Eliminating smoking from worksites, restaurants and bars is a low-cost, high-impact strategy that will protect nonsmokers and allow them to live healthier, longer, more productive lives while lowering health care costs associated with secondhand smoke," said CDC director Thomas Frieden.

"While there has been a lot of progress over the past decade, far too many Americans continue to be exposed to secondhand smoke at their workplaces, increasing their risk of cancer and heart attacks."

About 88 million nonsmokers in the United States are exposed each year to secondhand smoke, which causes 46,000 deaths from heart disease and 3,400 lung cancer deaths per year among people who don't smoke, the CDC said.

The tiny northeastern state of Delaware was the first to enact a statewide ban requiring worksites, restaurants, and bars to be smoke free, followed by New York state in 2003, according to the CDC data.

Government to Toughen Its Anti-smoking Laws

By 2020 There Could be More Anti-smoking Laws in the US : Study Personalised Printable Document (PDF)