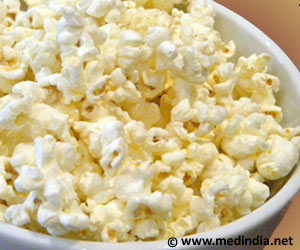 Robert Vince and colleagues Swati More and Ashish Vartak explain that DA has been the focus of much research recently because it is linked to respiratory and other problems in workers at microwave popcorn and food-flavouring factories.


Vince's team realized that DA has an architecture similar to a substance that makes beta-amyloid proteins clump together in the brain - clumping being a hallmark of Alzheimer's disease.

Alzheimer's disease (AD) is the most common form of dementia. Participate in this quiz to find out how much you know about this debilitating disease.
Advertisement
So they tested whether DA also could clump those proteins.

"In light of the chronic exposure of industry workers to DA, this study raises the troubling possibility of long-term neurological toxicity mediated by DA," the researchers said.

The study has been published in ACS' journal Chemical Research in Toxicology.

Managers Most Likely to Butter Up Resumes

A survey carried out by a talent assessment company has found managers are the most likely candidates to make false claims on their resumes.
Advertisement
<< Study Finds Teen Risk Behavior Increases If Teens Believe Th...
New Approach to Predict Intelligence Levels >>