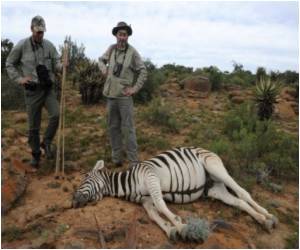 More than five tonnes of illegal bushmeat is being smuggled in personal luggage each week through one of Europe's busiest airports, reveals new research published in Conservation Letters today.

Working alongside customs officials at France's Roissy-Charles de Gaulle airport, researchers from the Zoological Society of London (ZSL), The Royal Veterinary College (RVC) and The National Veterinary School and the Natural History Museum of Toulouse identified eleven bushmeat species from confiscated luggage, including species of primate, crocodiles and pangolins.

Rare animals, including chimpanzees and gorillas, are being hunted into extinction because of record levels of demand for bush meat, a new study has determined.
Advertisement

This study quantifies for the first time the illegal trade of bushmeat through a European airport.


134 passengers were searched from 29 flights over a period of 17 days. The single largest confiscation was of 51kg of bushmeat carried by a single passenger with no other luggage.

Indonesia's Pet Tigers: Anything to Keep From Extinction

The Indonesian government has hatched a plan to save Sumatran tigers from extinction by allowing people to adopt captive-born animals as pets for 100,000 dollars a pair, officials said.
Advertisement
"Our results estimate that around 270 tonnes of potentially contaminated illegal bushmeat is passing unchecked through a single European airport per year, posing a huge potential risk to public health," says lead author Dr Anne-Lise Chaber, from ZSL and the RVC.

The Central African Republic, Cameroon and the Democratic Republic of Congo were identified as the main sources of bushmeat. The researchers conducted conversations with three traders in Paris revealing that, as well as street trading, traders take orders in advance and arrange delivery of the goods to the customer.

Co-author Dr Marcus Rowcliffe from ZSL says: "Our results show that this is a lucrative, organised trade feeding into a luxury market; a 4kg monkey will cost around 100 in France, compared with just 5 in Cameroon."

He adds: "Importing bushmeat is relatively easy as customs officials are given no financial incentives to uncover illegal meat imports, compared with the bonuses they're awarded for drug and counterfeit seizures. Also, penalties are very low for people caught carrying illegal meat."

39 per cent of the confiscated bushmeat was identified as being listed under the Convention for the Trade in Endangered Species (CITES), highlighting the unsustainable nature of the trade and its potential impact on species of conservation concern.

In addition to wildlife conservation concerns, the illegal trade of such large quantities of bushmeat raises serious questions about the importation of pathogens into Europe.

"Surveillance methods need to be more robust and deterrents more severe if we're to have any chance of halting this illegal trade," says co-author Dr Andrew Cunningham, from ZSL.

This is the first systematic study of the volume and nature of the international bushmeat trade. The researchers now wish to undertake a wider-scale study with greater geographic coverage to determine the overall volume of the illegal bushmeat trade into Europe.

A new study has indicated that extinction risks for natural populations of endangered species are likely being underestimated by as much as 100-fold because of a mathematical misdiagnosis .
Advertisement
<< Wimbledon Bans Vuvuzelas
Will Drinking Yoghurt Helps to Cure Hayfever? >>

Health Insurance - India
News Archive
News Resource
Advertisement
News Category
Milestone In Voluntary Blood Donation Achieved Samsung Reinvents Toilet for the Poor Which is a Better Form of Exercise: Daily or Weekly? First Phase of Foot-and-Mouth Disease Vaccination Shocking News: Polio Cases Return After a Decade in the US
More News
Sign up for Wellness Consult a Doctor Sign up for Selfcare