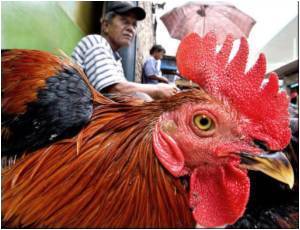 A bus driver in southern China who contracted the bird flu virus died Saturday, health authorities said, in the nation's first reported human case of the deadly disease in 18 months.

The man, surnamed Chen, died in Shenzhen -- a boomtown that borders Hong Kong where thousands of chickens have already been culled after three birds tested positive for the H5N1 avian influenza virus in mid-December.

He developed a fever on December 21 and was taken to hospital four days later, and diagnosed with severe pneumonia, said the health department in Shenzhen, a city of more than 10 million people.


The 39-year-old then tested positive for the H5N1 virus, the department said, adding he had apparently had no direct contact with poultry in the month before he was taken ill, nor had he left the city.

Allegations on the United States censoring science in an attempt to limit likely dangerous bird flu information in key journals has been rejected by top US health official Anthony Fauci on Wednesday.
Advertisement
The H5N1 virus is fatal in humans in about 60 percent of cases.

The health department in Guangdong province, where Shenzhen is located, announced Saturday that the bus driver died after his lung, heart and liver functions deteriorated.

"So far, 120 people who have had close contact with him have not presented abnormal symptoms," it said in a statement.

An official at the Shenzhen agriculture and fisheries bureau, surnamed Jiang, told AFP the bus driver had had no contact with birds.

"So far, we have not received any reports of any birds being infected," he said.

"It is unclear where the patient got the flu from. We will not make any plans to kill domestic birds unless we know that was the source, or if there is any sign of birds being infected."

Chinese and Hong Kong authorities have been working closely together since December 21 after live poultry supplies were suspended to the glitzy financial hub following the discovery of infected birds.

A spokesman for the Hong Kong health department said in a statement authorities would heighten their vigilance "and continue to maintain stringent port health measures in connection with this development".

Health authorities in China have also vowed to stay in "close contact and work together" with Hong Kong and "jointly step up measures in controlling the epidemic", the official Xinhua news agency said.

In the last reported human case in China, a young pregnant woman died of bird flu in June 2010 in the central province of Hubei.

The bus driver's death brought to 27 the number of people who have died in China since 2003, out of 41 reported human cases.

Authorities in Hong Kong have raised the bird flu alert level to "serious" since they discovered infected chickens, resulting in major disruptions to poultry supplies over the busy Christmas period.

The avian influenza virus has killed more than 330 people around the world, with Indonesia the worst-hit country. Most human infections are the result of direct contact with infected birds.

Scientists fear H5N1 could mutate into a form readily transmissible between humans, with the potential to cause millions of deaths.

Highlighting those fears, the World Health Organization said on Friday it was "deeply concerned" about research into whether H5N1 could be made more transmissible between humans after mutant strains were produced in labs.

Two separate research teams -- one in the Netherlands and the other in the United States -- separately found ways to alter the virus H5N1 so it could pass easily between mammals.

Top US scientists have called for global cooperation to ward off an uncontrollable pandemic even as they defended their bid to stop details of a mutant bird flu virus from being published.
Advertisement
<< Maldives Orders Closure of Spas After Protests
Banning Sunbed Could Prevent One-fourth of Skin Cancer in U... >>