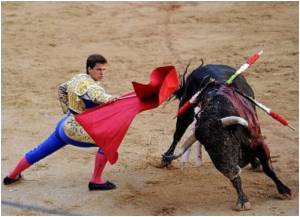 Catalans are going to show they are not amused when the local parliament votes on whether to ban the practice of bullfighting, and if it does so, the practice would get its death blow in Spain.

The assembly is scheduled to vote on the issue on Wednesday morning after animal rights activists campaigning under the platform "Prou!" or "Enough!" in the Catalan language, collected 180,000 signatures in Catalonia on a petition calling for the motion to be debated and voted on by the assembly.

Protestors Strip, Don Horns Against Spain's Running of the Bulls

Hundreds of animal rights activists took part in a "Running of the Nudes" Thursday to protest the traditional running of the bulls ceremony in the Spanish town of Pamplona.
Advertisement

The most recent indications are that a majority of the 135 lawmakers in the regional assembly are in favour of the motion to tighten Catalonia's animal protection law to remove an exception for bullfights from a ban on the killing or mistreating animals in shows.


If approved Catalonia, home to Barcelona, Spain's second-largest city, would become the first region in the country outside of the Canary Islands to ban the practice and it could inspire other regions to follow its example.

While the arguments in support of banning bullfighting have focused on the need to protect animal rights, many in the rest of Spain believe the drive to ban the practice is based in large part on a desire among some Catalans to emphasise their distinct identity.

In an editorial published Tuesday, centre-right daily newspaper El Mundo wrote that the issue had become a "political issue" in a region where the "idea is to ban everything that is Spanish".

The vote comes just one month after Spain's constitutional court struck down several article of Catalonia's "statute of autonomy" and conservative media commentators have suggested that Catalan lawmakers may now seek their revenge by banning bullfighting.

The charter, approved by Spain's national parliament in 2006 and endorsed by Catalan voters in a referendum, had expanded the already significant powers of self-rule of the government of Catalonia, which has its own language and distinct culture.

Jose Montilla, the president of the Catalan regional government, has given his 37 socialist lawmakers in the assembly the freedom to vote according to their consciences.

A vote in block by the Catalan socialists which had initially been expected would have guaranteed that the motion to ban bullfighting would be defeated.

Opponents of bullfighting, who are more numerous in Catalonia than the rest of Spain, point out that its appeal is declining quickly in the region even though the last active bullring in Barcelona still regularly stages fights.

They have counted on the strong support of international animal rights activists in their drive to get the motion passed.

The World Society for the Protection of Animals delivered a petition backing the bullfight ban that was signed by 140,000 people from around the world on Monday to each member of the Catalan parliament.

"Local members of parliament have the chance to make a bold statement about the region?s modern attitude by refusing to allow the continuance of this outdated and cruel practice," said the president of the group, Mike Baker.

The vote also comes at a time when the bullfighting sector in Spain -- which generates some 40,000 jobs -- is feeling the effects of Spain's economic downturn, with many smaller municipalities dropping bullfights from their annual "fiestas" in a bid to save money.

"To think they can steal a part of all you admire, that is so important to your life, your profession, it's hard," he said in an interview published over the weekend in daily newspaper La Razon.

Child protection and anti-bullfighting campaigners managed Thursday to suspend a battle between a Franco-Mexican child bullfighter and six young bulls due this weekend in southeast Mexico.
Advertisement
Advertisement
This site uses cookies to deliver our services.By using our site, you acknowledge that you have read and understand our Cookie Policy, Privacy Policy, and our Terms of Use  Ok, Got it. Close
×