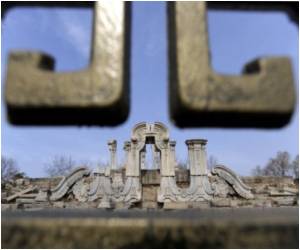 Gaggles of Chinese bodybuilders preened and performed press-ups backstage before competing for one of the country's biggest prizes in their discipline. Their bronzed bodies rippling with tension.

They included at least 20 professionals as well as scores of amateurs from across the country, in what organisers said was a sign of the bulging popularity of muscle building in China.


"I am totally devoted to bodybuilding -- I don't do any other job," said Jiang Min, 24, from northeast China, as assistants used rollers and brushes to daub brown make-up over his huge torso.
Advertisement
Wearing nothing but thongs, contestants grimaced as they contorted themselves under glaring stage lights in the central city of Zhengzhou, with an audience of several thousand people whooping in excitement.

"Chinese bodybuilders are now competing at an international level," said Gao Yan, a scientist turned gym entrepreneur who has run the competition for a decade and says it offers China's beefiest prizes.

But while men were encouraged to display huge muscles, in their own "Bikini Fitness" contest women appeared in skimpy swimsuits and high heels, and were judged by different standards.

"We don't have women bodybuilders, we don't want women to be trained like that, like muscle women."

Contestant Svetlana Borushko from Russia's far east won a women's category but said: "Women don't get big prizes like the men... I compete because I like my body."

Bodybuilding has at least a century of history in China, but fell out of favour following the Communist revolution in 1949, when the sport was condemned as western and bourgeois and competitions sometimes banned.

But it has enjoyed a resurgence since the 1980s, and competitors said the growing number of contests made it viable as a way of making a living.

"There are more and more competitions and bigger prizes, so more opportunities," said Wang Yu, a 24-year-old amateur on the cusp of turning professional.

The winners were presented with oversized cheques -- along with bumper-sized black tubs of protein supplements labelled "muscle powder".

Final Wish of Suicide Victim in China Denied
A man who texted police in China to donate his body and organs to science before hanging himself ......

Diabetes Rises Sharply in China, Touching 'Alert' Level
Nearly 12 percent of adults in China had diabetes in 2010, with economic prosperity sending the ......

High Protein Diet for Athletes
How much protein do athletes need to include in their diet? Proteins have a direct impact on the per...