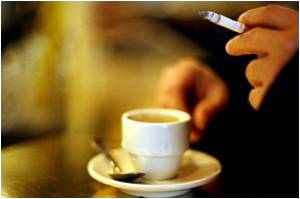 Tobacco-addicted Bulgaria could have its government propose an absolute ban on smoking in enclosed public places, including cafes, bars and restaurants starting June 1, said its press office.

The small Balkan country, home to the European Union's second-heaviest smokers after Greece, banned the habit in all government buildings, public transport, trains, cinemas, schools and kindergartens in 2005.

But bars, cafes and restaurants were allowed to have separate smoking and non-smoking sections, while establishments smaller than 100 square metres (around 1,100 square feet) could choose for themselves.


The proposed new ban, which needs to be approved by parliament and is the second government attempt after a previous effort failed in April 2010, will close this loophole.

Tobacco use in women is on the rise. The health risks of tobacco are far too many has never done a woman any good psychologically or health-wise.
Advertisement
"The measure aims to limit smoking and its harmful effects on health as cigarettes are a key risk factor for many socially significant diseases -- oncological, heart and pulmonary," the government proposal said.

Health ministry data show that some 3.0 million Bulgarians, or about 44 percent of the total population, are regular smokers.

Drug Interaction Checker A-Z Drug Brands in India Post-Nasal Drip Calculate Ideal Weight for Infants Vent Forte (Theophylline) Accident and Trauma Care Find a Doctor Find a Hospital Turmeric Powder - Health Benefits, Uses & Side Effects Loram (2 mg) (Lorazepam)
This site uses cookies to deliver our services.By using our site, you acknowledge that you have read and understand our Cookie Policy, Privacy Policy, and our Terms of Use  Ok, Got it. Close
×