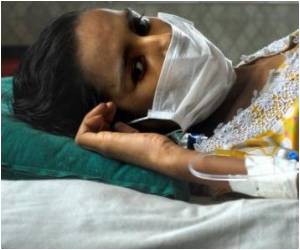 India's fight against tuberculosis has a superhero - pot bellied Bulgam Bhai who will ask people 'Has it been two weeks'.

"The creative challenge was to turn sputum (bulgam), which makes you say 'ughh!', on its head and come up with an idea that can over time and through exposure gain currency of its own," said Radharani Mitra, national creative director, BBC World Service Trust India that launched the campaign.

"It rings a bell in your mind on the right thing to do, if you have been coughing for over two weeks. The person needs to go to a testing centre and give the sputum sample," Mitra said.


TB, an airborne disease that kills two people every three minutes is caused by the bacterium Mycobacterium tuberculosis that affects the lungs.
Advertisement
Symptoms include severe cough which lasts for three weeks or longer, producing bloody or discoloured sputum, night sweats, fever, fatigue and weakness, pain in the chest, loss of appetite, and pain in breathing or coughing.

Bulgam Bhai will be the face and voice of the campaign against TB under Project Axshya, an initiative of various civil societies to raise awareness about the need to test for TB in case a person has had cough for two weeks.

People will be nagged by Bulgam Bhai with the question, "Has it been two weeks", through a range of TV and radio commercials, which have been designed to run Feb 15-March 31.

Quipped Mitra: "You can love or hate Bulgam Bhai, but you can't be indifferent to him."

Novel Tuberculosis Research Technology Promises New TB Treatments
Researchers at the University of Pittsburgh have been developing a new way of culturing ......