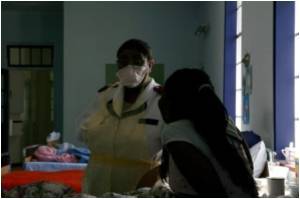 In an effort to beat superbugs like Staphylococcus aureus, which are resistant to many antibiotics, Alder Hey Children's Hospital in Liverpool is using toys sprayed with 'liquid glass' to prevent the build-up of hospital-acquired infections.

The liquid glass, which is safe and completely inert, forms an invisible, flexible coating on the surface of an object and repels dirt and grime.


"We have an awful lot of toys and many of them are difficult to clean. We even have to remove some of them because they are so difficult to keep clean, yet they are so important for the children," The Independent quoted Pauline Bradshaw, operational director of infection, prevention and control at Alder Hey, as saying.


"I think it's got great potential not just for toys but for other hospital settings," she added.

Tests have shown that coating surfaces such as floors, bedside tables, washbasins, toilet handles and lift buttons, can reduce bacterial growth by between 25 and 50 per cent.

The spray was made by a German company called Nanopool.

Neil McClelland, Nanopool's UK project manager, said that the liquid glass coating is just a few millions of a millimetre thick and the electrostatic forces on the nanoscale film repel water and dirt.

The liquid glass, a form of silicon dioxide in solution, was originally developed as an anti-graffiti coating for the outside of buildings but scientists soon realised that it had the potential to act as an anti-bacterial barrier.

Hospital-Acquired Infections May Be Curtailed With Silver, Copper Bullets
Researchers have developed films of silver and copper that can send bacteria to their grave, adding hope it could slash hospital infections.
READ MORE

Zinc Found Effective Against Antibiotic-resistant Hospital-acquired Infections
Researchers at the University of Cincinnati (UC) in America have found that zinc plays a key role in hospital-acquired infections, which are resistant to traditional antibiotic treatment.
READ MORE