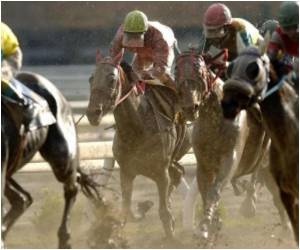 The monks and clansmen of the mystical land of Upper Dolpa first gathered eight centuries ago to pray, feast, fight over property and vie for the title of fastest horseman in the Himalayas.

They have met every 12 years since in the Tibetan Year of the Dragon for a festival in modern-day Nepal centred around the world's highest horse race, although these days they ride for honour rather than land.

Nepalese villager Khinu Darai used to have to walk about five kilometers (three miles) every day to collect firewood so she could cook meals for her family, say reports.
Advertisement

Around 50 cavaliers who have come from tiny villages dotted all over the Himalayas prepare to run the perilous course, a narrow strip of rocky river bed 4,300m (14,107 ft) above sea level in the rarified air of the world's tallest mountain range.


A horn signals the start and men in silk head dresses, leather coats lined with yak fur, golden chains and icons of the gods of animistic folk religions swinging from their necks gallop away on their ornately adorned ponies.
Advertisement
Thousands of monks and other devotees who have walked for days to the Shey Dragon Festival roar on their favourites and wave the flags of their gurus.

The eight furlong (1.6 kilometre) course is essentially a ravine studded with boulders, ditches and a not inconsiderable stream of treacherously cold water.

It is not long before the riders succumb to the hazardous terrain.

After the half-way turn three of the runners lose their balance, stumbling on the rocks along the jagged bed of the stream before a pile-up takes out another five near the end.

One horse tumbles to an almighty splash after clattering into a felled co-competitor, braying loudly as if to let the crowd know straight from the horse's mouth how unpleasant the icy stream feels.

The winner, by a clear distance, is a 23-year-old farmer named Tenzin Gurung from the neighbouring former kingdom of Mustang, whose mount, a chestnut brown Tibetan pony called Tika, has ridden the race of her life.

The organisers consider the idea of gambling and big cash awards somewhat "un-Buddhist" but Gurung's prize is to run Tika in a meadow dotted with around half a dozen 1,000-rupee notes ($11.50), provided by the organisers.

He is allowed to keep what he can pick up without dismounting or slowing down and manages to bend down and scoop up 3,000 rupees, enough in the remote Himalayas to pay for a child's education for a year.

"I didn't even have to buy her -- she is bred from another horse I owned. She is a very good ride but if I could use the horses they use in the West I'd be even better."

This seems unlikely, given the extra strain the thin mountain air puts on the animals.

The race is not really a test of endurance or speed, but of exploding force and surefootedness and Frankel or even Sea Biscuit in his prime would be no match for the stout and powerful Tibetan pony.

Some are simple, hardy mountain ponies developed from Mongolian stock while other riders mount swift and agile Nangchen horses, bred pure in the Kham region of northern Tibet since the 9th Century.

Scholars believe some breeds, unknown to the West until the 1990s, may be the "missing link" between the Przewalski horse, a wild Mongolian animal with neolithic origins, and modern ponies.

The Shey Dragon Festival, ostensibly a religious affair, is among the last of the great Himalayan clan gatherings that hark back to a time when warring tribes would meet over a week-long armistice to take their disputes to the sporting field.

Under the Tibetan Yarlung dynasty there was a large migration in the 8th century towards Dolpa, which changed hands between the Purang, Guge, Mongolian and Lo kingdoms over the following 800 years before being swallowed up by Nepal.

The festival, one of the most important events for Buddhist pilgrims, has taken place under all these regimes, with around 15,000 from across the world celebrating this year, over five days straddling August and September.

"We wanted to develop our knowledge of the Tibetan culture and of how people here live and spend their time," said Italian lawyer Enrica Senini, 39, who had trekked for five days with companions from across Europe.

"Coming to a festival like this is a unique opportunity to do that."

During the festival, prayers are conducted by Tulku Lama Rinpoches and pilgrims embark on an eight-hour walk, known as a "kora", around the sacred Crystal Mountain overlooking the festival site.

It is a lucrative time for traders, who lay on traditional food displays and make up to 80,000 rupees a day selling momos and other Tibetan delicacies.

"This festival means a lot to the pilgrims," said Zhechen Rapjam Rinpoche, 54, the head of the organising committee.

"It's nice to see this year the younger generation participating. In previous years it was only elderly people. I hope it continues to grow.

"Nepal is one of the weakest, poorest countries in the world and Upper Dolpa is the poorest part of Nepal so this is definitely the most difficult, remote festival in the world to get to."