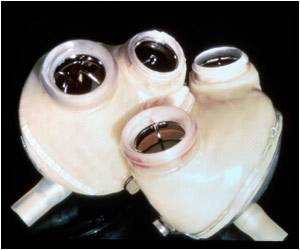 Chris Marshall, 50, who has an electric artificial heart needs to keep charging the device's batteries very often to keep pumping blood around his body.

The batteries last only for 4-hours. So during a long car journey he even plugs himself into his cigarette lighter to ensure he never runs out of charge.

Chris said, "I plug in at every available opportunity. When I go to sleep, I plug into the mains socket as if it fails in the night it will literally be goodnight. I must be one of the only people in Britain powered by their cigarette lighter."


In 2008, followng an ordinary gym session Chris collapsed after feeling dizzy and started frothing at the mouth. He was rushed to Derriford Hospital in Plymouth by ambulance, where doctors discovered he was suffering from narrowing of arteries. Doctors put in stents to widen his arteries. Later he also underwent a double heart by-pass.

Heart disease can be of many types depending upon whether they involve the heart muscles or artery walls or heart beats. Bad lifestyle choices contribute to heart disease.
Advertisement
However, last year his heart capacity deteriorated to just 13% and he was fitted with an implantable cardioverter defibrillator (ICD) - a device with an electrical impulse which regulated his heartbeat thus acting as an artificial heart and pumping blood around his body.

Last July, he was fitted with a left ventricular assist device (LVAD), a device with an external power unit powered by two batteries which last around 4-hours each.

However, this problem does not have a long-term fix and Chris is still on the donor list awaiting the perfect match.

Heart attack is the death of the heart muscle due to loss of blood supply. Simple guidelines to avoid heart attack are listed.
Advertisement
<< Gene That Causes Weaver Syndrome Discovered
New Diet Pill on the Anvil >>

Smoking And Tobacco
News Archive
News Resource
Advertisement
News Category
Why Heart Attacks in Women are Often Missed?: Study Simple Prick May Save Your Life from a Heart Attack New Retinal Examination can Predict a Heart Attack: Study One-third of Greenlanders are at Genetic Risk for High Cholesterol: Study Multiple Heart-Related Conditions Linked To Increased Dementia Risk
More News
Sign up for Wellness Consult a Doctor Sign up for Selfcare