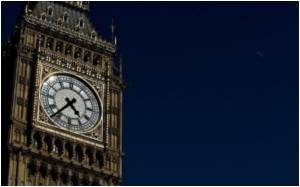 The British government plans to bring UK time forward by an extra hour to match with Central European Time [CET].

Seen as a tourism strategy in preparation of the Olympics next year, it would mean lighter evenings and darker mornings as the sun rises and sets one hour later according to the reset timings. This would definitely boost tourism as visitors take advantage of the longer days. The economy would benefit by billions of pounds through tourism. The 'Lighter Later' campaign also would help towards a greener economy by cutting down carbon emissions by at least 447,000 tonnes every year.

On the other hand, a fear of increased incidence of road accidents has been expressed especially in Scotland, with darker mornings. The National Farmers' Union in Scotland is not happy with the proposal as farmers in the far north would be impacted the most by the change. They have agreed, though, to a trial of daylight saving if it benefited Britain as a whole.


A government analysis of the expense involved and the benefits in shifting the time forward was approved by the ministers under David Cameron  in December. Now, they would like a general consensus before they agree to take definitive action. Cameron is working for a 'united time zone.'

The proposals will be published by the Department of Culture, Media and Sport soon.

When people in some parts of the world advance their clocks by one hour in the spring in observance of daylight saving time (DST), the internal rhythm of their body doesn't adjust with them.
Advertisement
<< Genetic Causes for Stuttering
Indian Drug Research Centre Criticized >>

Diaphragmatic Hernia Selfie Addiction Calculator Find a Hospital Hearing Loss Calculator Blood Donation - Recipients The Essence of Yoga Drug - Food Interactions Accident and Trauma Care Vent Forte (Theophylline) Turmeric Powder - Health Benefits, Uses & Side Effects
This site uses cookies to deliver our services. By using our site, you acknowledge that you have read and understand our Cookie Policy, Privacy Policy, and our Terms of Use