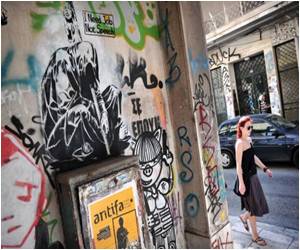 A mural by British street artist Banksy which mocks government surveillance has been defaced with spray paint, leaving fans saying they faced a race against time to save the artwork of £1 million.

It is just three miles from the UK government listening post GCHQ, which was the subject of a series of recent revelations by fugitive former US intelligence contractor Edward Snowden.


Vandals spray-painted silver and red graffiti on to the elusive artist's design overnight, but residents have expressed their hope that the piece, valued at £1 million ($1.7 million, 1.3 million euros), can be saved.
Advertisement
Residents have been using toothbrushes and cloth to clean the piece and prevent any lasting damage.

"Spy Booth" had been under threat of removal after interest from an American investor, who wanted to buy the work and transport it from the wall.

But the Save The Banksy campaign to keep the mural in place appeared to have succeeded earlier this week, when Hekmat Kaveh, a local businessman, stepped in to purchase it.

Kaveh said on Friday he was "absolutely appalled" by the vandalism but remained focused on protecting the work.

"It only given me more determination to make sure that we -- Save the Banksy -- do actually save it," he said.

"Everybody is just really, really upset," said Angela De Souza, another member of the campaign group.

"The Banksy is protected by anti-graffiti paint but we are in a race against time because the paint could seep through the layer of protection and ruin the artwork."

Banksy is renowned for his street artworks, which often use subversive or satirical imagery to tackle subjects such as war, capitalism, hypocrisy and greed.

The artist's identity remains shrouded in secrecy but he is believed to have started out as a graffiti artist in the southwestern city of Bristol.

Good, Bad, Ugly of World Cup Shown by Graffiti
Graffiti artists have taken over to Rio's streets and have put down stark images blasting the cost ....

Guards on Close Watch After Banksy Graffiti Woes
As British street artist Banksy brought his in-your-face creations to New York City, where some ......

Walls in Rome Tell a Gripping Story
A tradition in Rome going back thousands of years is the time-honored practice of scribbling ......