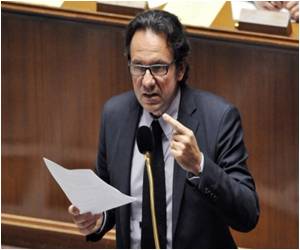 At least six out of the 10 people were found to have eaten the sprouts at a local fete in Begres, southeast of Bordeaux, said a police statement, citing health authorities.

Health authorities said tests had shown two of the patients were infected by the same potentially deadly strain of the disease as that found recently in Germany, but did not say whether there was a link between the two outbreaks.

Frederic Lefebvre, secretary of state for consumer affairs, said the sprouts were purchased at a Jardiland store and were produced by Thompson & Morgan based in Ipswich, England.

The minister called for the the company's sprouts, mustard and roquette to be withdrawn from sale while an analysis was conducted.

Lefebvre also recommended that "consumers who bought these same products not use them," he said in a statement.

He stressed however that "the link between the symptoms and eating of the sprouts so far has not been definitively established."

Bordeaux police had reported Thursday that seven people were hospitalised, but raised the number of cases on Friday to 10 people, all of whom they said suffered bloody diarrhoea. Two people were able to return home and one was not hospitalised.

An outbreak of a killer strain of E. coli bacteria in Germany has killed at least 43 people, health authorities there said. That outbreak is blamed on organic vegetable sprouts grown in northern Germany.

Last week seven children were hospitalised in the northern French city of Lille with E. coli poisoning thought to have been caused by eating frozen hamburgers. Police said the Bordeaux case was not linked to that one.

An E.coli strain blamed for killing dozens of people in Germany is found to be a genetic mix and its ability to stick to the intestinal walls may have made it so lethal, says study.

Cooking in Copper Utensils Might Help Ward Off E.coli

A new study suggests that using copper utensils while cooking prevents the cross contamination of food items with E.coli bacteria.

Six children aged between 20 months and eight years old were hospitalised in France after eating burgers infected with E.coli from German meat.

Aloe vera juice provides anti-inflammatory action in the digestive system. 100 g of amla contains 600 mg of this protective vitamin.Sprouts are one of the densest sources of nutrition.

E. coli is a type of gram negative bacteria that lives in the gastrointestinal tract of people and animals. Some E. coli bacteria strains in contaminated food and water can cause diarrhea, urinary tract infections and abdominal cramps.

Start reaping the benefits of the amazingly nutritious alfalfa sprouts by incorporating them in your daily diet.

Organosphosphorus compounds are used as insecticides and chemical warfare. They are easily accessible, thus they are a commonly associated with suicides and accidental poisoning.

Eating sprouts is a deliciously inexpensive way of obtaining protein, vitamins, minerals, and enzymes. Sprouts have the advantage of providing complete nutrition.

Good health and well-being depends on a leisurely breakfast. However, rushing our breakfast on account of work commitments is the biggest mistake we make.