British on a High at Beer Festival 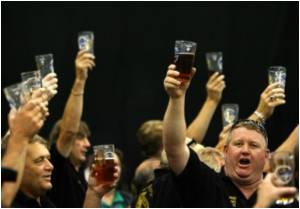 Beer was highly recommended at the Great British Beer Festival by both organizers and participants, who extolled its virtues as a better brew than wine.

The Campaign for Real Ale (CAMRA), which is behind the giant annual party, said beer had fewer calories than wine, and switching from the grape to the grain could save as many calories as are burned in a half-hour jog.

And CAMRA hope the notion might help their push to get more women supping Britain's national drink.


More than 350,000 pints were to be served up at Earls Court exhibition centre in west London -- temporarily the biggest pub in the world, serving more than 60,000 punters.

Brewing engineers from the Technische Universitaet Muenchen (TUM) in Germany are trying to literally make a 'green' beer, which during brewing, would allow energy savings of up to 20 percent.
Advertisement
Among the 500 plus beers available during the five-day festival were some striking names.

Louise Ashworth, CAMRA head of marketing, said it was time to challenge stale perceptions of beer.

"Swapping a glass of wine for a glass of beer over seven days can actually lose you calories -- equivalent to doing a half-hour jog -- because beer is actually much less fattening than wine," she told AFP.

"Beer can be a very healthy alternative and people should consider swapping.

"The misconception about beer bellies, you don't really hear about wine bellies. It's something of a misnomer or a stereotype."

Melissa Cole, a freelance beer writer and tasting expert, ran a special "girl's guide" to take groups of women through the variety of flavours on offer, from refreshing, golden ales to dark, chocolatey stouts.

"I want to provide an environment where women will learn about beer and won't be patronised," she told AFP.

Cole said female wine drinkers had quite developed palates, opening the way to exploring the world of ale.

"Women are really getting more confidence around beer.

"There is something for everyone. It's not that you don't like real ale, it's just that you haven't met the right one for you yet."

Real ale is fresh beer brewed using traditional ingredients and left to mature in the cask from which it is served, as opposed to lager, pasteurised and then fizzed up.

"Bad lager is the spawn of Satan!" Cole said.

In the cavernous hall, bearded beer fest veterans in faded tee-shirts and 20-somethings alike tasted their way across the rows of pumps.

"I've been picking the ones with the nice names, we've had Honey Buzzard and Golden Spring," said New Zealand teacher Anne Bowler, 26.

"They're nice but I've got to keep going until I find the perfect one. I'm kind of a new convert."

None of this modern fizzy cider over ice for her.

"I'm an old biddy, I know: real stuff is great. You get this young, trendy stuff and it's absolutely rubbish."

"I'm not going to attempt to say it," she said, adding: "I quite like the chocolate beers so I might search out some more of those."

She said: "What does the Oktoberfest have to do with beer? Nothing! There are only five beers and it's more about quantity than about quality. It's not about tasting."

The festival runs till Saturday.

Munich's annual beer festival kicked off with general elections in a week's time seemingly far from the mind of most participants.
Advertisement
Advertisement
This site uses cookies to deliver our services.By using our site, you acknowledge that you have read and understand our Cookie Policy, Privacy Policy, and our Terms of Use  Ok, Got it. Close
×