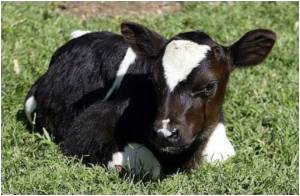 A British animal welfare group has petitioned the government to prevent the entry of products from cloned animals into the food chain.

The petition, delivered by activists wearing "cloned" masks of Prime Minister David Cameron, was hastily organised after news emerged this week that meat from offspring of a cloned cow had entered the British food chain.

EU May Approve Sale Of Food From Cloned Animals' Offspring

EU farm ministers revived the row over 'Frankenfoods' Monday by retaining the possibility of cloned animal products being sold in Europe, despite scientific uncertainty and Green opposition.
Advertisement

Written by Compassion for World Farming, the petition called for more openness about food production and expressed concern about the welfare of cloned animals.


"David Cameron, we believe, is the man to bring forward the aspirations of the British public and ban cloned food," the group's chief executive Philip Lymbery told AFP.
Advertisement
Refering to the use of 40 protestors in Cameron masks to make their point, he added: "We wanted to have a tongue-in-cheek expression of what it means to take away individuality through cloning."

On Wednesday, it was revealed that a few unwitting members of the British public had eaten meat from two bulls who were among eight cattle conceived using embryos harvested from a cloned cow in the United States.

"People want honesty, they want to be able to trust their food, yet this cloned food has slipped into our food chain unauthourised, unlabelled and unnoticed, until now," said Lymbery.

In July, the European Parliament voted for a ban on the sale of meat or dairy products derived from cloned animals or their offspring.

The welfare group is now pushing for the the European Commission and EU member states to enact the ban.